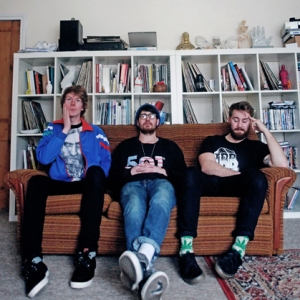 TRAAMS have premiered their live video for “Swimming Pool” off the band’s debut album Grin, which is out now on FatCat. The live video is part of the “FatCat Sessions” in which the label is capturing live performances from their bands in a new local Brighton studio. TRAAM Stu Hopkins says, “‘Swimming Pool’ is one of our favorite tracks and we rarely play it live, so it was great to do it as part of this session. We filmed it in a converted treehouse in Brighton. Bowlegs asked us to bring some stuff down to put up, so we nailed a rug to the wall and then hid some other stuff about the amps and kit. If you look carefully you can spot some posters, bric a brac and a Padley heirloom that we brought down.” TRAAMS will be performing at this year’s SXSW music festival and more dates will be announced in the coming weeks.

Grin is the follow-up the recently released  Ladders EP and was recorded throughout 2012 and 2013 with producers Rory Atwell and MJ from Hookworms.

Hopkins elaborates, “We really want to push both those areas as far as we can. We like seeing people dance and having fun but we also want to be noisy and aggressive.”