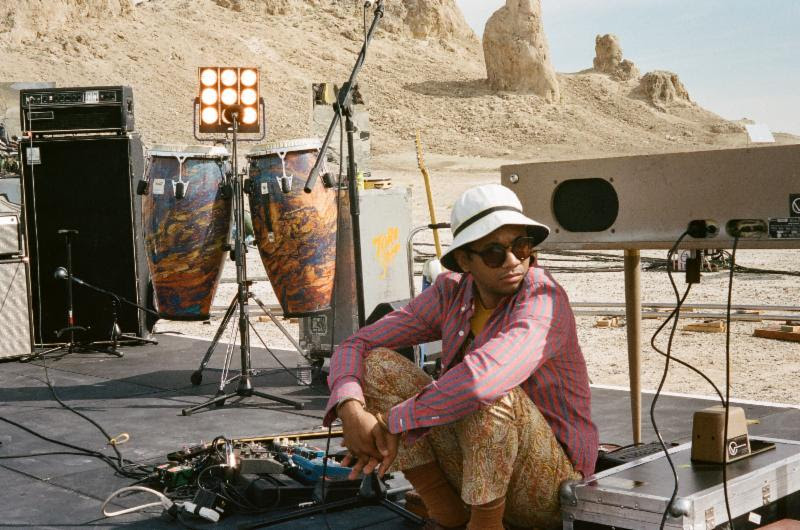 Chaz Bundick has shared a new live version of “Grown Up Calls” (off 2013’s Anything In Return) — and now he’s releasing a video of the band performing the song under the stars in the Mojave Desert.

The Live From Trona record will be released digitally on August 5 and on limited edition vinyl on November 4. The Live From Trona concert film will screen at New York’s House of Vans on August 2, Los Angeles’ Ace Hotel Theatre DTLA on August 4, and Bundick’s hometown of Columbia, South Carolina’s Nickelodeon Theatre on August 4.

In April of 2016, following a year of non-stop touring and promotion of his fourth album What For?, Chaz Bundick of Toro Y Moi and his live band decamped to California’s Mojave Desert for a recording session that resulted in Live From Trona, a 13-track album featuring live versions of songs from across Toro Y Moi’s catalog. Carpark Records will release Live From Trona digitally on August 5th and in physical format as a limited edition pink vinyl double LP on November 4th. Filmmaker Harry Israelson captured the entire recording process and directed the documentary Toro Y Moi: Live From Trona, featuring exclusive performance footage and candid scenes.

Israelson, a Vimeo 9-time Staff Picked director broke down the fourth wall, revealing the filmmaking process by making equipment, lights and crew visible at all times. With no audience in attendance and a spectacular natural environment that feels otherworldly, the film pays homage to rock films of a previous era. As the sun sets behind the pinnacles, which formed thousands of years ago in what used to be a prehistoric lake, the supernatural setting weaves seamlessly together with 13 psychedelic tracks, all recorded on site over the course of an entire day. Through the use of hand-drawn animations and behind-the-scenes VHS footage, Live From Trona offers viewers a surreal concert experience, placing them front row at a private Toro Y Moi show.