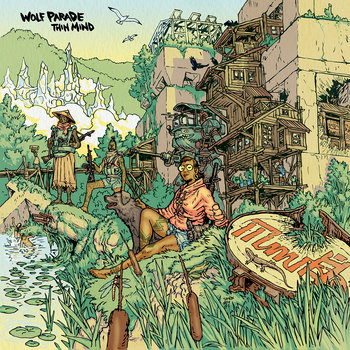 The title of Wolf Parade’s fifth LP, Thin Mind, refers to the shortening of attention spans caused by content overload. With attention spans diminishing, Wolf Parade waste no time launching into the album with urgent opener “Under the Glass.” “We are free in our minds,” guitarist Dan Boeckner sings, “but nobody knows what they want anymore.” True, as he critiques, passive consumption is easier than critical engagement, and it comes at the expense of making
informed choices.

Thin Mind is Wolf Parade’s first album since multi-instrumentalist Dante DeCaro left the band in 2018. But the original trio of Boeckner, drummer Arlen Thompson, and keyboardist Spencer Krug have locked right back into their fulsome groove.

Once again, Boeckner and Krug have split lyric duties, and the difference shows. On the piano- based “As Kind As You Can,” Krug continues his penchant for vivid storytelling and mini-epics.

Slinky, nocturnal single “Julia Take Your Man Home” finds Krug singing about a toxic hypothetical self, the kind of obnoxious boor who carves dicks into objects and shit-talks purportedly fragile foes “made of glass.” Musically, “Wandering Son” is, like most of the songs on Thin Mind, a deceptively bright spot. But Boeckner’s passionate indictment of internet addiction could not be blunter. “Staring at the screen until I lost my vision…. I could have been asleep by now,” he laments, his words bobbing alongside Krug’s buoyant keys.

For Wolf Parade, the solution towards a more conscious and sustainable future is by reaching into the past. Despite Thin Mind’s concern with the future, the album brims with 80s synthesizers and 90s MIDIs. They combine with a myriad drum fills and sharp guitars for a sleek, lively listen; Thin Mind couldn’t be further from the “hollow automaton feeling” of endless, mindless scrolling Boeckner described in a press release.

“Forrest Green” speaks to the theme of crowding and decimation in a more physical context. Wolf Parade wrote and recorded Thin Mind at Risqué Disque, a barn-turned studio on Vancouver Island, where Thompson and Krug live and where Boeckner grew up. The forces of real estate development and over-logging crowd and decimate the Island the same way digital content crowds mental spaces. “Feels like home, and I can’t stay home,” Boeckner sings before the song blossoms with synthesizers.

The desire to escape reoccurs throughout Thin Mind. “We’re gonna run away to a place we just don’t know,” Krugsings as he watches the world collapse around him on the melancholic and hopeless “Out of Control.” He doesn’t know how they’re going get there or where it is, but he does know, “We’re gonna take a beating. We’re gonna take a fall. We’re gonna take a rocket to that planet…” The anthem drifts off with a dreamy outro as lofty as his aspirations to escape and start a new life elsewhere.

The lower tempo and less anthemic “The Static Age” follows. Here, too, Boeckner aspires towards aimless escape and new beginnings. “You get to feel like the living dead…. Out in the streets, wild dreams in our hearts. Trying to leave but we don’t know where to start…. We can begin again.” “Against the Day” is the most retro-sounding song on Thin Mind. Atop tubular synths, the song marches onward with cold wave determination. Up until “Against the Day,” the band looked backwards to move forwards. But “Against the Day” throws that approach and optimism out the window. “We were lost on the map. We marked off half, but we can’t get back,” Boeckner sings. Just as his hope wanes on “Against the Day,” Krug figures out the first step on the next song, album closer “Town Square”: he plans to break free through a hole in the floor. Even in the face

of the darkness and despair that suffuse the song, romance persists when Krug holds the pen (or has his fingers on the keyboard): “I would have painted you under in the town square under a purple sky. Now all we are is reaching for the light.” Whether or not the future is as dark and dire as Wolf Parade make it out to be, critically minded works like Thin Mind will stave off a total eclipse.