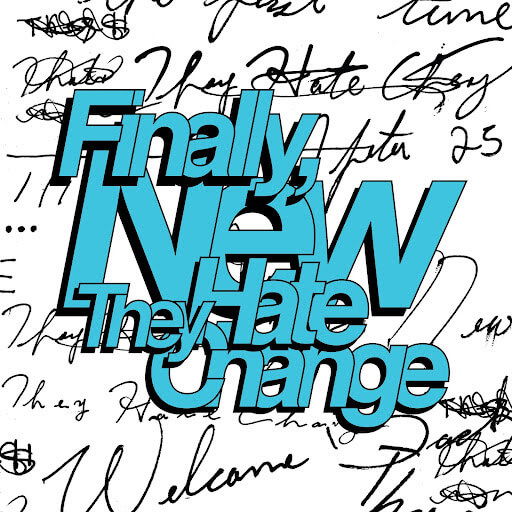 “Speakers banging coast to coast they gon see / We run them beats them beats don’t run we.” They Hate Change, Jagujaguwar’s latest addition to their diverse indie label, embody the spirit of rap: good rhymes regardless of the background music, though the instrumentals on their latest album Finally, New are danceable, grooveable underground sounding joints.

Dre and Vonne, who met as 14 year olds in their apartment complex and got deep into music liner notes and design references on sneakers, tend to come full speed at the mic, calling out the rap scene for its fake bravado and materialism and talking about how they keep it 100. For them, it’s the long game and the real game.

“Got a M3 inside of my bag, they scratching they head like how it fit? / Shit, as far the indie in the city go / We running it, but never put no guns in a video,” they rap on the appropriately named “Blatant Localism.” They fit, like an M3, more syllables than the average rapper into their songs, and they don’t repeat any of the tired bars you often hear. “The ball is in our court it ain’t no sense in playing defense.”

They are a duo out of Tampa, Florida, but are going nationwide with their talent. They put funny spins on their racial identity (“I’m a blonde and so is my pet / I don’t rap I commentate”), but deal with racial issues, nonetheless (“Paint me a villain, because my skin tone is tinted”). The thing that strikes me the most about their music, besides its cool delivery and unique soundscape, is the way they impress with their intelligence more than with their bravado. Rap music is an opportunity, they know, to fill pages with unique observations about the self and others, astute social commentaries, and just plain fun in wordplay.

The album ends with their most accessible, danceable, and poppy number, “From the Floor.” “Came up from the floor, we was plotting on the low / If you trying to kick it, then you know just where to go.” They are indie at heart, building from the ground up, and now joining one of the most respected and most unique labels in the indie world right now. “I’m not a star / Somebody lied / You see the car / My ’85 / Don’t need no switch / I’m sittin’ high / You feel that bass / That’s how I ride.” Gotta love a rap star who’s not obsessed with their stardom, and a duo who make every effort to keep it real.