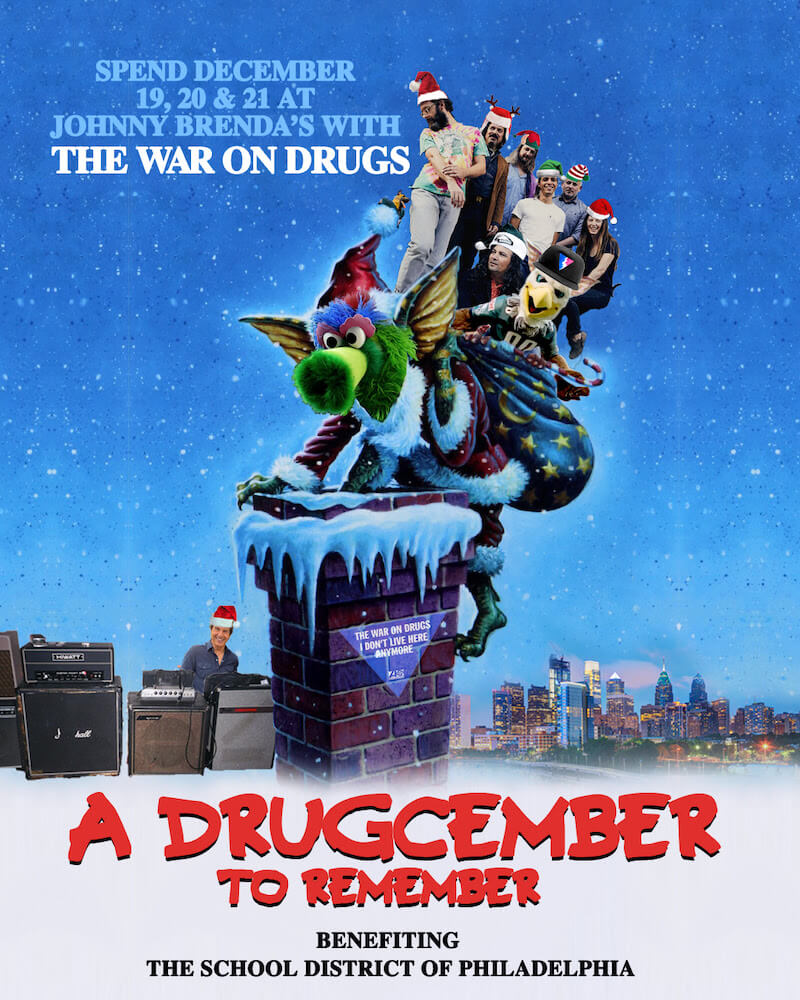 The War On Drugs announce the return of A Drugcember To Remember, a series of holiday shows directly benefiting The Fund for the School District of Philadelphia, a nonprofit that raises and coordinates investments into the Philadelphia public schools. After a two year break, the 2022 Drugcember will consist of three very special and intimate shows happening December 19th-21st at Johnny Brenda’s in Philadelphia.

Additional fundraising will happen via an auction hosted by Julien’s, beginning in January. Auction items will include a Golden Ticket good for a pair of tickets to any headline show from The War on Drugs for the next five years, signed memorabilia from Philadelphia professional sports teams, signed instruments from The War on Drugs, signed items from additional esteemed musicians, and more. Sign up (https://thewarondrugs.lnk.to/Newsletter) to be notified when the auction goes live. Each night will also feature an in person live raffle with a special selection of curated prizes on the table.

Drugcember is “an opportunity for the group to play in their hometown, celebrate a local cause around the holiday season, and perform in more intimate venues than a band of their stature can usually commit to” (Philly Voice). It caps off a year of 100-plus shows played throughout North America and Europe in support of their newest album, 2021’s I Don’t Live Here Anymore.

The War On Drugs’ bandleader Adam Granduciel comments, “There’s no better way to wrap up a long year on the road than with three shows at our favorite club, Johnny Brenda’s in Philadelphia. We are grateful that since 2018, with our fans’ help, our Drugcember to Remember shows have raised money for The Fund for the School District of Philadelphia. This year will be no different and we can’t wait to cram on that tiny Brenda’s stage, jam with some friends and have three more memorable nights in Philly. See y’all soon xo ag.”

“We are incredibly grateful for The War On Drug’s ongoing commitment to supporting Philadelphia’s public school children. The example they set and generosity they inspire is uplifting to students across our great city,” says Kathy Rubino, Vice President of Development for The Fund for the School District of Philadelphia.

For more information on The Fund for the School District of Philadelphia, visit https://www.thefundsdp.org/.

Purchase tickets for the War On Drugs HERE