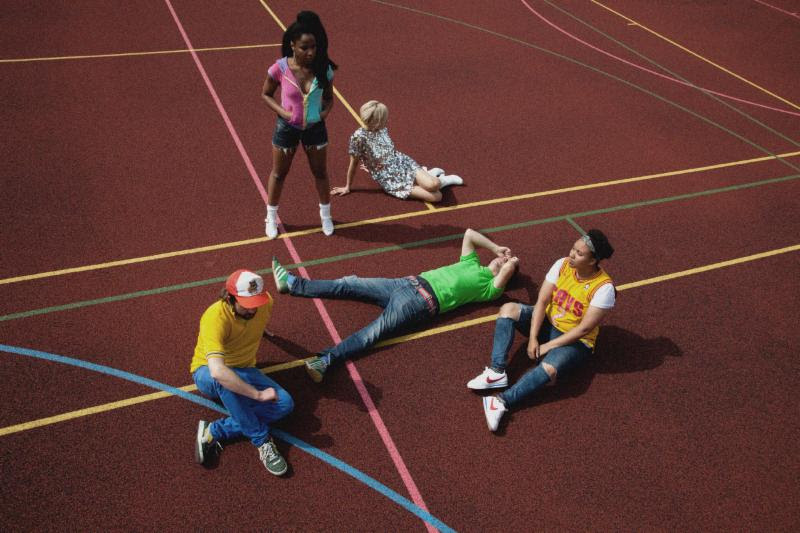 The Go! Team
Share on TwitterShare on PinterestShare on PocketShare on RedditShare on FacebookShare on Email

The Go! Team have released a new video for “Semicircle Song,” the first single from their new album SEMICIRCLE out January, 19th on Memphis Industries. Co-directed by Team leader Ian Parton along with his neighbor Bosie Vincent, the video was partially filmed during the album recording sessions in Detroit and features several guest singers of The Detroit Youth Choir. As Ian explains: “We were looking to make something that takes the marching band feel of the song and puts it through a kaleidoscope – something trippy and Technicolor, making geometry out of everyday patterns. I found this marching band in Jacksonville who had the best bright purple and red costumes and we arranged to film with them just a week before the floods hit. The vocals for “Semicircle Song” were recorded in Detroit with a bunch of teenagers who we were filming as they were singing – so the footage in the video were the actual takes that made it onto the record.”

For SEMICIRCLE, the Brighton-based, melody-obsessed Ian Parton had the vision of a marching band going rogue and chucking away their sheet music to blast out Northern soul stompers, Japanese indie-pop swooners and old-school hip hop jams. But his extensive sample library could only take him so far. So Ian made a pilgrimage to Detroit — city of Motown and The Stooges, of musical (and actual) revolution — where he hooked up with The Detroit Youth Choir. “Semicircle Song” was one of the resulting collaborations.

In keeping with the album’s marching band theme, Ian stacked up sousaphones, glockenspiels and steel drums, mic’ing them all from a distance to recreate that gymnasium sound. The effect is a kaleidoscopic cacophony, almost as if the sound itself is bent and refracted in the metallic curves of a trumpet; comforting and intoxicating at the same time. Ian is keen to emphasise that the vibrant utopia he and his cohorts have conjured up on their fifth album is not an escapist fantasy but a potentially achievable goal. “It’s about reminding yourself of the good things in life,” he says. “We don’t want to be dumbly optimistic and say, ‘Hey, isn’t everything great!’ but there’s something to be said for just getting on with it, for getting organised and not letting the fuckers get you down. Party for your right to fight!”