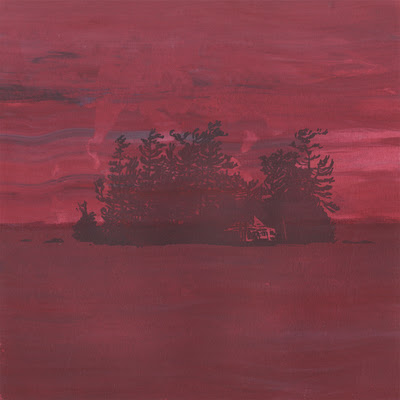 The namesake site of Montreal’s The Besnard Lakes exists in Canada’s rural Saskatchewan, visited by the group’s core couple, Jace Lasek and Olga Goreas, each summer. Last time around, the pair found themselves surrounded by the flames of a forest fire, a chaotic songwriting experience that went on to inform the devil-may-care spirit of their fifth record. A Coliseum Complex Museum dropped earlier this year. Even so, writing songs in a place with so much significance meant culling the tracks down to just an album became a near-impossible task – inevitably, there were tracks the band loved that didn’t quite fit with the overall album.

Nearly one full year after A Coliseum Complex Museum was released, The Besnard Lakes are releasing a 12” of two brand new tracks, written at the same time as the last record: The Besnard Lakes Are The Divine Wind, slated for a February 3rd release.

“Laura Lee,” a sibling track to the album’s first single, “The Golden Lion,” sprawls – a spacious, lush stretch filled with reverb-laden drums echoing around Goreas’ otherworldy vocals. Title track “The Divine Wind” finds the band at its most psychedelic, a sustained keyboard building into a bombastic coda, pierced by Lasek’s unmistakable falsetto.

Pre-order The Besnard Lakes Are the Divine Wind:
besnardlakes.lnk.to/divinewind