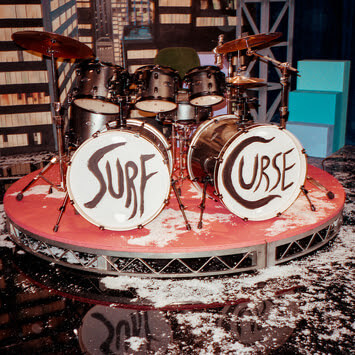 Surf Curse is Nick Rattigan (drums, vocals) and Jacob Rubeck (guitar, vocals), Henry Dillon (bass) and Noah Kohll (guitar). First meeting in their hometown of Las Vegas as middle schoolers, principal duo Rattigan and Rubeck called their collaboration a number of names (Buffalo 66, named for the Vincent Gallo film, was a highlight) before settling on Surf Curse after a move to Reno so Rattigan could attend college there. In between Rattigan’s classes and Rubeck’s shifts as a dishwasher at a senior center, the two made ten-hour drives to LA for gigs at iconic DIY venues like The Smell downtown. Eventually relocating to LA, they’ve since released three acclaimed albums—2013’s Buds, 2017’s Nothing Yet (both recorded in a single week at The Smell) and 2019’s Heaven Surrounds You, produced by Jarvis Taveniere of Woods. They’ve gone on to tour worldwide, with a rabid and dedicated international fanbase. Now signed to Atlantic Records, their fourth LP is imminent.

Surf Curse will bring their wildly acclaimed live show back to the road this year with sets confirmed at Coachella and Governors Ball plus very special headline dates in London, Paris and Berlin this summer. More festivals and a full worldwide headline run are to be announced.