I really enjoyed the video Callum made for Laurie’ from I Love the New Sky,” says The Charlatans’ front man. “So when I finished Typical Music [the album], I sent him the 22 tracks and he picked ‘Sure Enough’ as a track he’d love to work on and as we had it earmarked for a single, it just felt like the right thing to do.”

“As soon as I heard the track, I thought it’d be perfect for my stop motion style as the song had a really naturalistic, sort of old school sound, and my style is a little more retro than most animated stuff so I was excited to dig in!,” says Scott-Dyson. “On the last video I did with Tim, we did a card cut-out video with a bit of a narrative and character running through it, so this time I wanted to just do something a bit more light, fun, and montage based, sometimes playing off the lyrics and other times just doing its own thing. I also decided to go with felt as the main material for all the elements in the video, which posed a bit more of a challenge in terms of movement but I was excited for the video to have a different feel and texture to anything I’d done in the past. I’m really happy with how it all came together and I hope people really enjoy it and feel more positive and upbeat when they check it out!”

Along with serving as the frontman for the highly influential band The Charlatans, Burgess has also released five diverse solo albums, three unique memoirs, the foundation of the prismatic O Genesis label, and more than 1000 installments of the now-beloved Tim’s Twitter Listening Party. Conceived by Burgess in March 2020 at the dawn of the pandemic era, the ingenious online events brought people around the world together through real-time album playbacks via Twitter, featuring stories from bands and fans, rarely seen images, and exclusive insights and anecdotes from the artists who created some of music’s most iconic albums.

“OK, we all know about double albums, right?,” says Burgess. “Historically, they’ve been thought of as indulgent. But I came to the conclusion that what I was doing was the opposite of that. I wanted to give people everything that I’d done. Every idea was treated as if it was the best thing and had to be treated with extreme care. I wanted to give everything of myself. That was it.”

Burgess brought his burgeoning batch of songs to the world-famous Rockfield Studios in Monmouthshire, Wales, a storied establishment that held powerful memories for him, including the recording of The Charlatans’ 1997 landmark, TELLIN’ STORIES, an experience irreparably tarnished by the death of the keyboard player Rob Collins in a car crash at the bottom of the lane while making that album. Though Burgess hadn’t properly been back to Rockfield in almost 25 years, he now felt ready to return, this time joined by a pair of truly inspired collaborators in Daniel O’Sullivan, a gifted multi-instrumentalist, producer, and member of his live band, and visionary keyboard/synth wizard Thighpaul sandra (Julian Cope, Coil, Spiritualized). 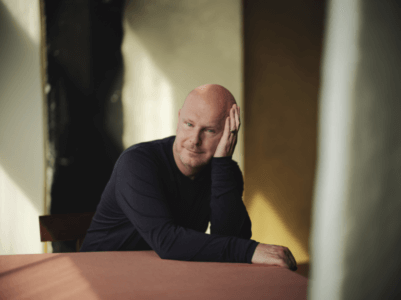