Animalia AKA: Jill Krasnicki started performing music as a bassist at the age of 17 in her hometown of Tasmania, Australia. For 10 years, she played various venues and festivals and toured around Australia, Ireland and parts of Europe, eventually landing in Toronto, in 2009. At the start of 2012, Animalia was born as a dark folk acoustic act and saw the release of her DIY first EP To the Waking, the Shaking and the Volatile. Her second EP A Wave to Wash the World Away, incorporated beats and by the start of 2014, Animalia had left her guitar-based songs behind and had become a fully electronic act.

Her debut album Mouth Full of Teeth, was released in June 2014. Animalia worked closely with Brandon Cronenberg (Antiviral) and Karim Hussain (Hobo with a Shotgun) on the creation of the music video for “Stifling.”

Animalia released her second album Dissonance in early 2016 with the singles “Little Earth” and “Paradise” coming shortly before. (dissonance) is an alt-electro album with pop sensibility. It is conceptually dark and each song focuses on a different element of my relationship with the world around me.

The title steams from the concept of believing in two opposing thoughts: a clashing of the positive and the negative, of idealist thoughts and realistic thoughts.

“The writing process was heavily emotional but fast – a purging of ideas and feelings. Paradise was written after what seemed like an endless news stream of young people losing their lives through gun violence and Little Earth was my wake-up call to becoming too focused on the negatives.” 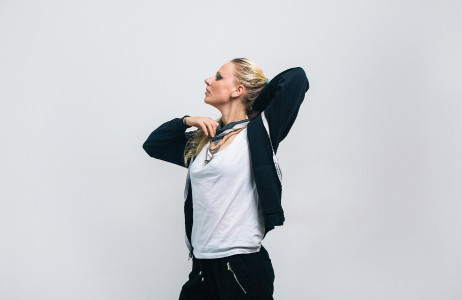