Formed in 1976 at the forefront of the fledgling London punk scene, UK legends, The Damned return with their new album, Evil Spirits, April 13th via Search And Destroy/Spinefarm Records. Their first album in ten years, it is preceded by latest single, “Standing On The Edge Of Tomorrow.”

The single is “an optimistic song even though it is about a dark subject, in a world obsessed by ‘self’,” explains frontman, Dave Vanian, who also directed the video for the track. “This is a cry for humanity to recognize its humanity, before it’s too late. There is a strong influence of Joe Meek here: ‘Telstar’ was a glorious song about the opportunities of the future. I’d like to think that ‘SOTEOT’ reflects a similar sentiment.”

To accompany this up-to-the-minute garage psychedelia that gallops like Scott Walker’s The Seventh Seal, amid ominous ‘dies irae’ chorale and mucho post-millennial frustration, the video for Standing On The Edge of Tomorrow depicts a vision of the future from a band whose colourful, anarchic, ever-changing vision has been propelled by an indefatigable creative motor. Quite simply, The Damned have always pushed their sound and message forwards from inception back in 1976 and have no plans to slow down in 2018.

“The exploration and colonization of other worlds is something we will face in the not so distant future,” adds Vanian on his own work directing the video. “My fervent hope is that we do not take our fears and prejudices with us and repeat the mistakes we have made on our home planet.”

“We deliberately recorded the album retro style,” explains guitarist, Captain Sensible. “The same way our debut album was made, basically. There’s something wonderful about the seventies sounds; glam, rock and punk records, they all sound so great and Tony specialises in beautifully crafted old school production. He had us all playing live, bashing it out in the same room with a focus on getting the initial band version of each song as close as possible to the finished thing.” 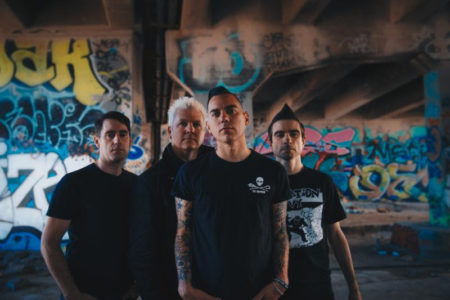