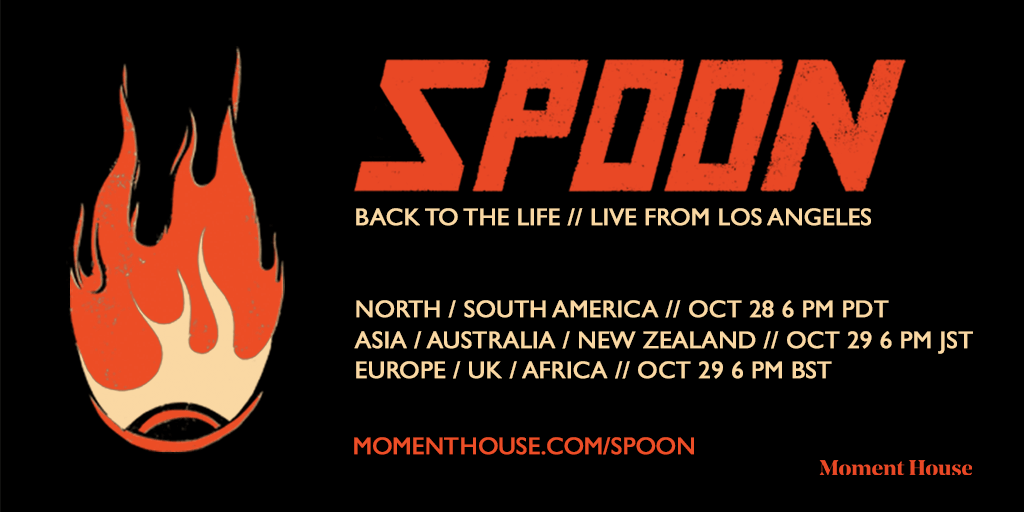 Spoon, have announced, they will perform a sold out surprise show at the Teragram in Los Angeles. Following their show at the Hollywood Bowl with St. Vincent last Friday night, the show marks Spoon’s first club show in Los Angeles in many years. Wanting to give fans who couldn’t get a ticket – both in Los Angeles and around the world – a chance to see this special event, Spoon are presenting the live concert event “Back to Life // Live From Los Angeles” on October 28 and 29 via the social live media platform Moment House. Tickets are on-sale now for $15 and are available here and will feature exclusive merch bundles available with purchase. The concert will air on October 28 at 6pm PT in North and South America. In Asia, Australia and New Zealand it airs at 6pm JST on October 29 and in Europe, the UK and Africa at 6pm BST on the 29th.

Spoon have spent much of 2021 in Austin, Texas working on new material at drummer Jim Eno’s Public Hi-Fi studio. The band are currently on tour in the U.S. and will be making their way to the East Coast with a show at Brooklyn Steel on October 23. All dates are listed below.

Spoon’s set will cull from their entire catalog but they will also be debuting some brand new songs from the Austin recording sessions the band undertook over the last couple of years, of which Britt Daniel told Rolling Stone drew from the strength of the band’s live show ““My thought was to take that energy and make a record with it.” Spoon has emerged from lockdown alive and vital. Non-stop touring on their greatest hits album Everything Hits At Once (2019), kept the band busy and sharp as always.