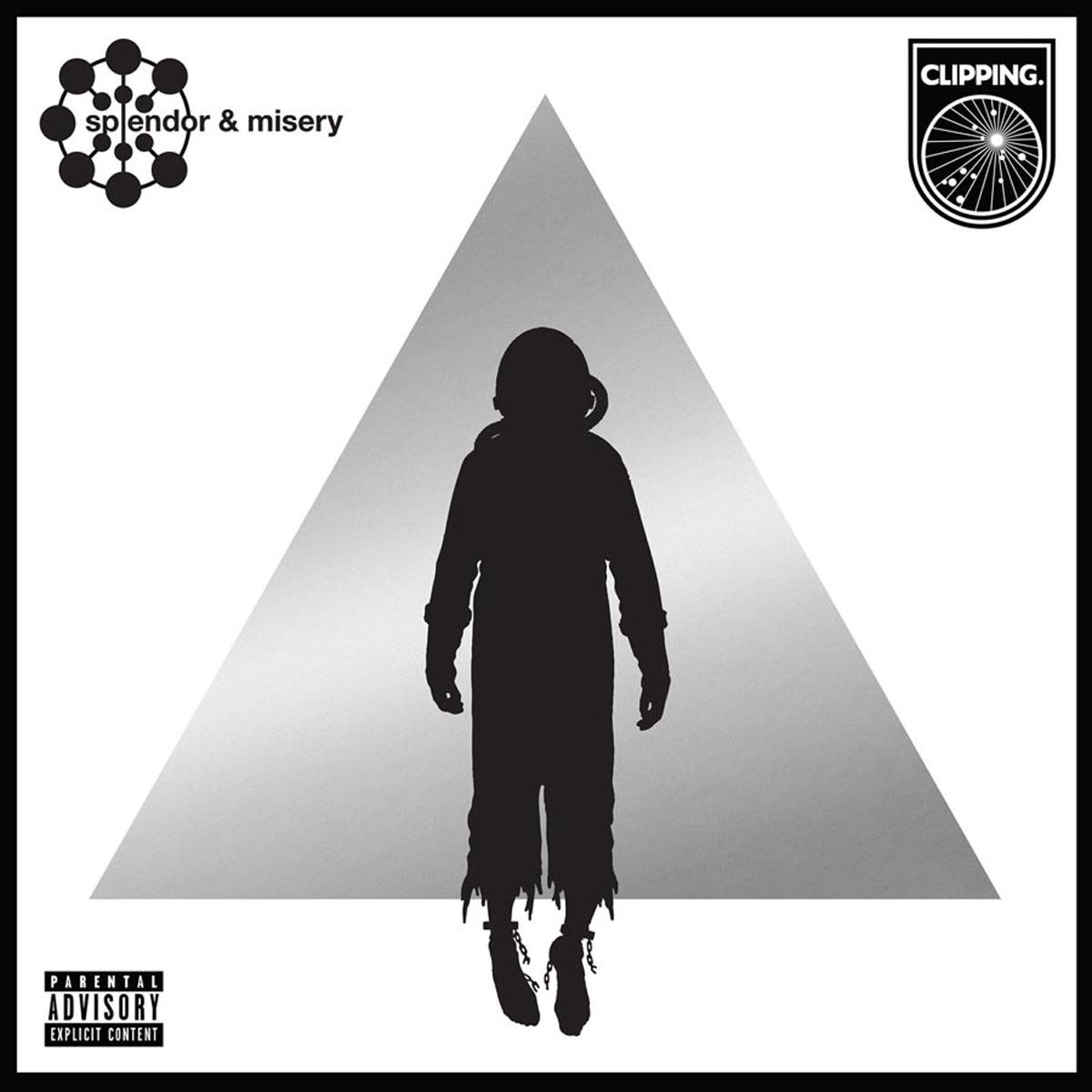 clipping. work well when they impose restrictions on themselves. They’ve tried on some and abandoned others, restricting the use of the pronoun “I” in their raps, never making a beat using traditional drum sounds, prohibiting real-life stories from infiltrating their lyrics. As a creative technique, it’s helped the L.A. trio establish themselves as an audacious and often very strange rap group. On Splendor & Misery, clipping. have set out to write an Afrofuturist album, which can be seen as simultaneously a self-imposed formal limitation, and an exercise in speculative thought. They pull off the task with absolute precision.

Splendor & Misery is a dense, cerebral narrative centered on the last survivor of a slave revolt, who steals a spaceship and flies alone into deep space. “Cargo 2331”, the only name given to the album’s protagonist, discovers music onboard the spacecraft. While a solo journey into the lonely expanse of the cosmos comes with it’s own set of hang-ups, the metaphor of alienation and Otherness that frontman Daveed Diggs crafts on Splendor & Misery, foregrounds the possibility of self-making and the transcendence of fixed identity altogether. On “A Better Place” Diggs raps about moving beyond history by looking towards a utopian future – an upbeat and ethereal meditation that speaks to Afrofuturism core philosophy.

True to clipping.’s roots as a remix project, the framework they’ve chosen for this album has been warped and tangled. The group sees how far it can stretch Afrofuturism, squeezing a black perspective on sci-fi through the most visceral tropes of space travel. Diggs’ Afrofuturist raps are heavier than the celebratory jams of Mothership Connection and sensual playfulness of Aquemini. With masterfully worked field recordings chopped and distorted into drum beats, the Musique Concrète-inspired production of William Hutson and Jonathan Snipes simulates the interior of a space-craft full of sharp sounds and vast, never-ending hallways.

While the album can be difficult, it’s not completely abstruse. ‘All Black Everything’ showcases clipping.’s emotional energy early on. ‘Air ‘em Out’ and ‘Baby Don’t Sleep’ could easily be full-on bangers. Splendor and Misery feels relevant and immediate, even at it’s most conceptual.

In some ways, Splendor & Misery bears an unexpectedly close resemblance to Diggs’ more well known project – the Broadway musical Hamilton, where Diggs’ was cast as Marquis de Lafayette/Thomas Jefferson. If Hamilton explores America’s creation myth, Splendor & Misery offers a chance to think about the Atlantic slave trade and its continuing legacy. Channelling African American spirituals, ‘Long Way Away’ becomes the main idiom of the album, filtering and fragmenting the acappela track to sound like a long lost radio broadcast. Cargo 2331’s grapplings with his past are complex and emotionally salient, fit to match the distressing and highly inventive sound-work on the album.

Replete with sci-fi references and nudges to Afrofuturist musicians before them, the album confronts the crushing darkness inherent to the alienation of black diaspora and speculates on the identity as an intrinsically fluid process. Splendor & Misery is sincere and staunchly ambitious. With it, clipping. Have solidified their position at the forefront of experimental music.