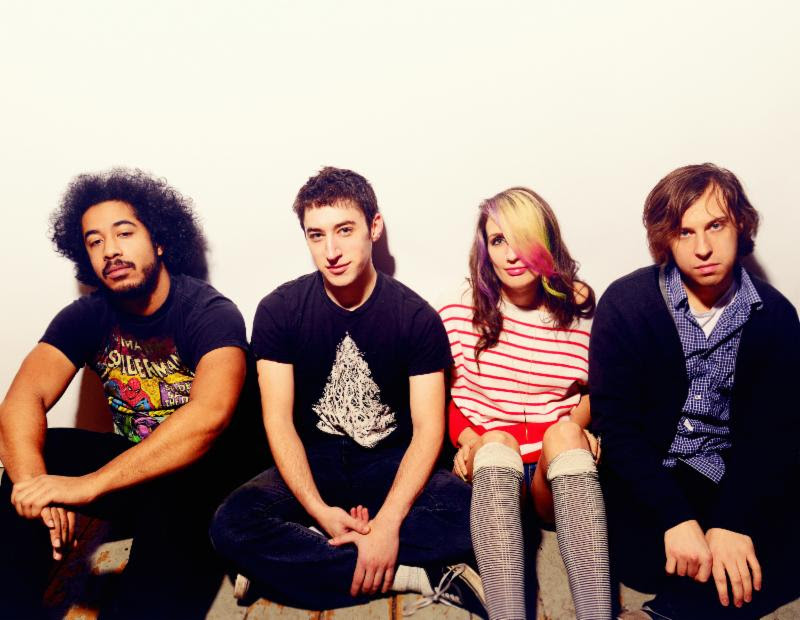 Today, Speedy Ortiz premieres an all new cover of the Cardigans’ “Hanging Around” in anticipation for their upcoming Boston show on August 30th. The band will perform on a boat out of Boston Harbour as part of the Rock and Blues Concert Cruise series. The ship will set sail at 1:00 p.m. for about a three hour cruise that also features Downtown Boys.

Guitarist and lead singer Sadie Dupuis shares, “In December, Speedy played a hometown residency at our beloved hangout spot Great Scott. We tried not to repeat any songs over the course of three shows–four, actually, if you include the one we played in a basement under a fake name. That meant playing at least 40 (!) original songs for our Boston pals, plus a few covers, one of which was this album track from The Cardigans’ 1998 release ‘Gran Turismo.’ The Cardigans make really smart pop music dosed with contradictory textural choices–crunchy guitars, moody electronics, seemingly intentional tape warping. Their hits are pretty well known, and are all great, but I love “Hanging Around” for its detached, spooky lyrics. This song could be about cognitive dissonance, or it could be about some invading body snatchers–maybe both? We stayed pretty true to the original on this one, ‘cuz we think the original is so good. Instruments recorded at Studio 52 by Jesse Weiss of Palehound and Grass is Green, with vocals recorded in Jesse’s bedroom while staring at his Chavez poster for inspiration.”

The group, including Mike Falcone on drums, Darl Ferm on bass, and new addition Devin McKnight of Grass is Green on guitar, have spent the last year on an almost endless cross-continental touring jag, tagging along with the likes of The Breeders, Stephen Malkmus & the Jicks, and Thurston Moore.

Dupuis wrote much of Foil Deer at her mother’s home in the Connecticut woods, where the songwriter imposed a self-regulated exile and physical cleansing of sorts, finding that many of the songs came to her while running or swimming alone. “I gave up wasting mental energy on people who didn’t have my back,” she says. “Listening to our old records, I get the sense I was putting myself in horrible situations just to write sad songs. This music isn’t coming from a dark place, and without slipping into self-empowerment jargon, it feels stronger.” Many of the songs deal with a similar sense of starting over, editing out the unnecessary drama. “Boys be sensitive and girls be, be aggressive,” she sings on “Mister Difficult.”

And while their debut album was recorded on the fly, Speedy Ortiz spent almost a month in the studio on Foil Deer. Falcone’s drums are taut, mechanistic; Ferm’s bass ranges from the aggressive rattle of an AmRep classic to smoother, hip-hop inspired lines. McKnight, meanwhile, lends spacier, textural riffs to complement Dupuis’ wiry, melody-driven guitar style. “The demos for our songs have always had tons of small details and production experimentation, but we never had any money to pay for more than a couple days in the studio, so the songs came out very live-sounding and guitar heavy,” Dupuis says. It was recorded and mixed at Brooklyn’s Rare Book Room with Nicolas Vernhes (Silver Jews, Enon, Deerhunter), with the record mastered by Emily Lazar (Sia, Haim, Beauty Pill).