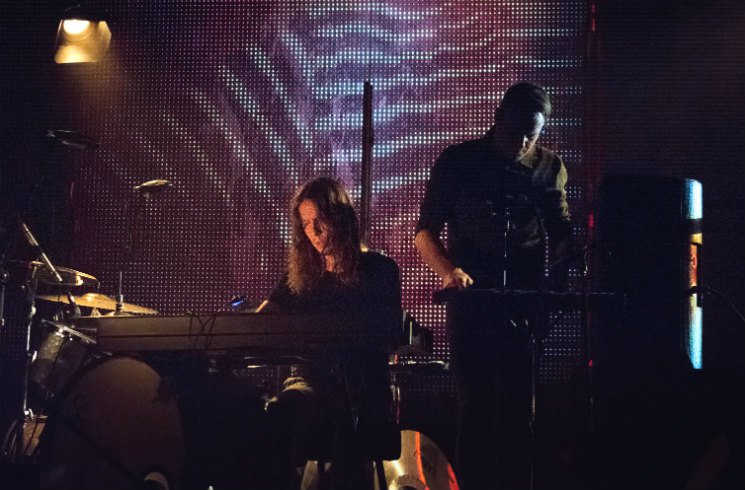 Iceland’s Sigur Rós was in Vancouver for a back to back performances on Sept 18th and 19th. We caught the second show at the Queen Elizabeth theatre.

With a foreboding ethereal fractal storm of stage projections and lighting behind them, Sigur Rós walked onstage to begin a performance that was both a retrospective and a reinvention. Previously a quartet, and often touring with a string section, this tour’s performance was done entirely as a trio. The show was divided into two sets, each containing songs from past albums as well a new material. The first set highlighted slower material from early albums such as the awkwardly titled “( )” , “Valtari” and

“Takk.” The magnificent stage lighting and projections created different illusions for the band to temporarily exist within: at one point appearing as a giant story book with band members looking like pop up characters; to a nostalgic red rehearsal room during the piano instrumental from ( ); to an eternally expansive night sky that seemed to expand well beyond the limits of the stage itself.

Crouched over his guitar, played with a bow, and feeding it into delays and distortion, singer Jonsi delivered another flawless performance. His falsetto never faltered, and the washes of delay driven tones and feedback filled the theatre to great effect. He stopped the show with possibly one of the longest held notes I’ve ever heard sung. Stalwart bassist Georg Holm moved effortlessly between electric bass and keyboards, and it was only drummer Orri Dyrason who showed any cracks in the performance with a few hesitations when switching from drums to keyboards, but by the time Orri closed the first half with a solo keyboard moment before the intermission all seemed to be running smoothly.

Starting the second set form behind the screens, blurred with projected smoke and beams of light, the band appeared to be digitized on stage in real life. As the screens lifted during the climax of Saeglópur, floor to ceiling explosions of light filled the Queen Elizabeth with a galaxy of coloured starlight. Without a word, the trio held the audience’s attention through out the evening, each song as enthusiastically received as the last. Sigor Rós concluded the show with a song new to me, culminating with a barrage of white lights, their characteristic long build and epic crescendo and abandoned in a wall of feedback. The crowd roared in approval, and in their iconoclastic manner Sigur Rós did not return for an encore but rather stood centre stage to applaud the audience. It almost seems surprising to say, especially when considering the dirge-like tempos of much of the material, but Sigor Rós rocked tonight, and people loved it.