midwxst, recently dropped new single and visualizer “Shame.” The song, is described as an emotive track where the artist’s lyrics candidly describe the feelings garnered after a friendship is betrayed. The track, arrives with an accompanying visualizer of fuzzy layered images of midwxst performing alone to the camera.

“Shame,” lands just after the single and video for “Care” and midwxst’s performance at Day N Vegas. “Shame” also arrives on the heels of the release of midwxst’s EP BACK IN ACTION. Over the 8-track project, midwxst hones in on his genre-fusing, playful sound including previously released singles “Slide” featuring Ericdoa and Slump6s, “Tic Tac Toe,” “Made It Back,” and “All Talk”.

From the oft-overlooked state of Indiana, midwxst, born Edgar Sarratt III, is a genre-defier combining hyperpop and digicore with hip-hop alongside candid lyrics that reveal he isn’t afraid to let his true feelings show. midwxst shares, “A lot of people expected me to be a trapper, rapping about guns and all the generic mainstream stuff. When I talk about how your own mental health and emotions can be the most dangerous thing you possess, especially as a teenager or young adult, people get such a different vibe from me and that’s what I strive for.” 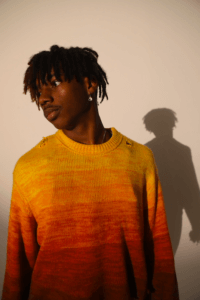