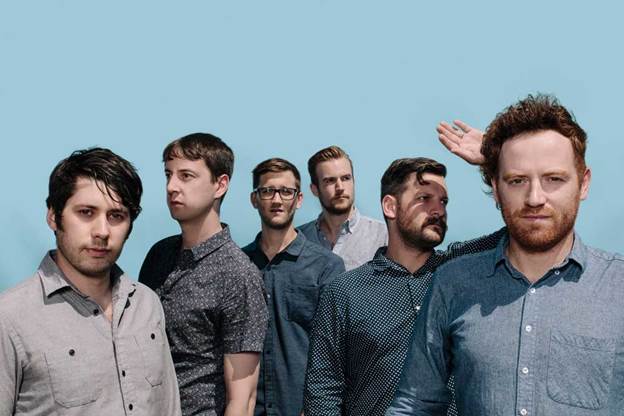 Yesterday Royal Canoe premiered the “rhythmic, percussive, synth-heavy goodness of “Love You Like That”. The track is off Royal Canoe’s forthcoming release release Something Got Lost Between Here And The Orbit, due out September 16 via Nevado Records.

Never ones to stray from the road for too long the Winnipeg sextet wrapped up a string of summer tour dates with Plants & Animals and are now ready to jump back in the van to promote the highly anticipated release of Something Got Lost Between Here And The Orbit. A whole autumn full of tour dates that takes Royal Canoe to every corner of North America begins September 8. All performance dates can be found below.

After two years of writing and recording between tours, Something Got Lost Between Here And The Orbit surfaced with a unique and intensified voice. It was co-produced and mixed by Ben Allen (Gnarls Barkley, Animal Collective, Deerhunter), who concentrated their sound-crafting attention on two fundamental elements: drums and vocals. Royal Canoe has always had an intensively rhythmic heart and that is more the case than ever. Their lyrics grow organically out of an addictive percussive flow and the unique topography of each track. Reinforcing their vocal and percussive core allowed them to be more adventurous with experimentation; more determined in their ongoing pursuit of the elusive musicality that can be found in collisions between digital and analogue worlds.

SOMETHING GOT LOST BETWEEN HERE AND THE ORBIT
TRACKLIST

Somersault
Walk out on the Water
Living a Lie
Checkmate
Love You Like That
I Am Collapsing So Slowly
Holidays
Out of the Beehive
Bicycle
How Long Is Your Life?
BB Gun