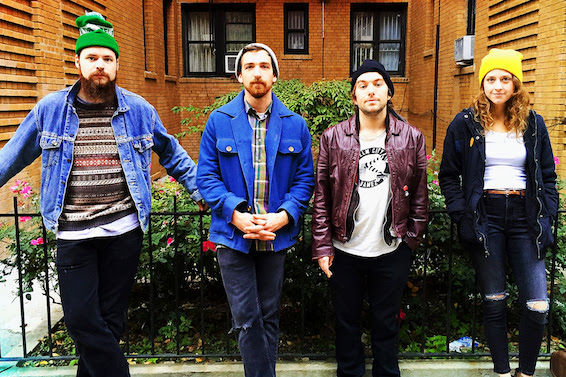 Ahead of the release of their sophomore album this Friday, November 16th, New Hampshire’s Rick Rude are streaming the album, Verb For Dreaming. The band will also be playing a show in Portland, ME December 8th with Priests and Empath. The full-length will be available via Exploding In Sound.

Rick Rude is “a four-membered creature whose tattered robe, four-string guitar, and sand-filled shoes are surrounded by a haze of sweet smoke and empty beer cans, thrashes about with a charismatic enthusiasm matched only by its lethargic demeanor, speaking fluently in the cryptic languages of dreams, love, and ennui. It inhabits a dark cave on the mountainside of truth, carefully furnished with dismantled electronics, books on meditation, and warped records of Guided By Voices, Built to Spill, and Cheap Trick. A nocturnal creature, Rick Rude feasts on mystical fungi, boredom, mushy guitar riffs, and the delicacy of the human soul.”

Informed by their upbringing as “people of the woods, small towns and tight communities,” the members of Rick Rude say their music is “driven by the connections and experiences within these close-knit settings.” That earnest nature and sense of familial purpose can be felt throughout Verb For Dreaming, shining bright on “Dough Nation,” a shout-along anthem about finding happiness in the pursuit of helping others find happiness, and “Surrounds,” a tale of love and loss, starting over and surrounding yourself with those you care about most. They set mode and tone better than most, jittering between serene slow-dripped beauty (“Dolly Hook”), volcanic “college rock” (“Verb For Dreaming”), and dismantled art-pop with a post-punk intelligence (“Jupiter”).