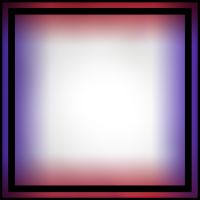 The L.A.-based, oddly-named, electro-symphonic pop duo OOFJ is comprised of the couple Jenno Bjørnkjær and Katherine Mills-Rymer and sophomore album Acute Feast is set to be released on April 21st on Ring The Alarm. Jenno and Katherine’s debut album, Disco To Die To, came out in March/April 2013, coloring the delicate spring-time cherry blossoms a down-tempo pop noir. This time around OOFJ mainly aims for the light skies above, creating super-saturated, orchestral waves of radiant bliss, peppered with percolating to propulsive electronic percussion and graced by Katherine’s heavens-high, euphoric sighs.

Danish multi-instrumentalist Jenno and South African vocalist Katherine met in New York City while Jenno was working on scoring music for Lars Von Trier’s Melancholia. OOFJ, which stands for ‘Orchestra of Jenno’ and is pronounced ‘oh of jay’, started as a solo project for Jenno, but once he connected with Katherine, the pieces of OOFJ fell into place. The duo marries the sweeping, cinematic sonics of Jenno’s for-films work with the breathy pleasure of Katherine’s vocals and percussive electro-beats. The overripe Acute Feast should come with a warning label: Danger of aural orgasmic overdose with prolonged play.

The lush “You’re Always Good” starts it all off on a heady dreamstate note, with drawn out swirls of heartstrings-piercing symphonic strings and Katherine’s delicate, helium-hazed vocals pitted against the fast clip of an electronic beat and bass line-like pull. The heightened swoon of this first track slightly mellows out on next tune “I Forgive You”, a torch number of sorts featuring a downcast and contemplative Katherine cooing “I forgive you / like I’m s’posed to” in dulcet tones amid a crisp clacking beat and the reverberating shiver of symphonic strings and other things. A plethora of echoed light ‘n’ low electro-blips waver throughout “Snakehips” as Katherine switches to smoldering mode, intoning in sultry fashion to “Move your snakehips around”. The tune comes off like “Sexy Boy” by Air on Ecstasy – and that’s a good thing.

The beats and accompanying distorted noises get harder and discordant on “Don’t Look”, but are contrasted by Katherine’s softly crestfallen, airy vocals that recall songs like “Battersea” and “Renaissance Affair” from Blue Wonder Power Milk-era Hooverphonic. Neither Jenno nor Katherine seem to be extremely gifted lyricists, and the words on display here and on the rest of the tracks remain relatively simplistic and consist mainly of repetitive phrases of the song titles and similar concepts. If Katherine’s vocals are considered as another instrument contributing to the sonic whole and overall mood, then this is acceptable (akin to the Cocteau Twins), but otherwise the lack of more complex lyrical details becomes taxing.

“Cliffdive” is a slow swoon of Katherine’s delicately incandescent vocals cascading and rising over extended orchestral strings, electro-noir percussion, and fast-tapped, glitchy beats. A low-key syncopated beat and pulled, deeper-register strings intro and run through “Cherry” as Katherine drifts in ethereally, cooing “Your skin tastes like mine” in wonderment. The continual use of the same high-pitched, tear-inducing symphonic strings strain takes a toll by “Cherry”. Luckily, “Totally” treads more cautiously, focusing on Katherine’s melancholic vocals as she trills “totally broke my heart” and “totally ripped apart” amid a subdued beat and simmering, suspended electronics. Unexpected, clicky handclaps come in as percussion to much enjoyment.

“Wolves” poaches electronica territory with its glitchy, techno tempo. Katherine supplies sweet ghostly vocal “Oohs” and diffuse vocals against squelchy, shimmering, and beeping sonics. There’s sex… I mean, sax at the start of “Sailor”, an instrument that Jenno was classically trained in. Katherine switches back to her sultry persona, going lower vocally at times, as the expressive, velvety sax lines suffuse the song with a ruminating vibe. Those darn symphonic strings make an appearance again, but mostly in the background, along with various pelting, reverberating electronic notes. Album-closer “Stephen Says” is an unusual treat that spotlights reflective acoustic guitar strum. Katherine’s crushed, but breathy vocals dip and lift longingly as the prominent symphonic strings leave their dramatic mark on what could have been a more straightforward singer-songwriter ballad.