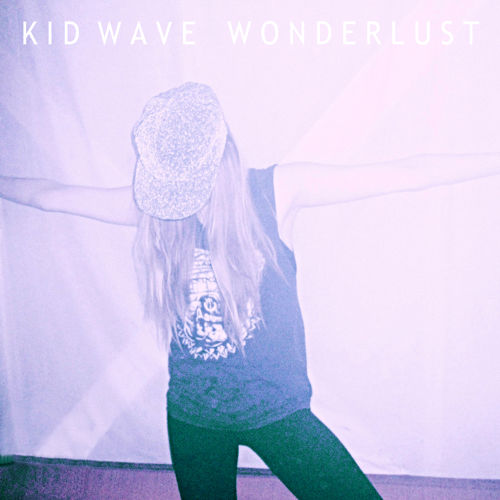 London based band Kid Wave are to release their first full length album Wonderlust at the beginning of next month out on the Heavenly label. Hailing from the UK, Sweden and Australia, the band is made up of members Harry Deacon, Lea Emmery (lead vocals), Serra Petale and Mattias Bhatt.

Wonderlust was produced by Dan Austin (Doves, Cherry Ghost) at the Eve Studio in Stockport. The result is a mix of ‘90s indie, jangle-pop with some fuzzy rock thrown in there too. Opener and title track of the eleven-track album, “Wonderlust” is a punchy, steady track that is very nineties rock.

“Best Friend” is filled with powerful guitar riffs but still manages to maintain a sad edge; “You are my best friend, don’t wanna lose you, I’m falling backwards, you made me say this, I hear you talking, I’m way too drunk, do you remember, you were my best friend?” Indeed the whole album has a sadder, reflective edge with the likes of slower tracks “Walk on Fire”, “All I Want” and “Sway” embodying these feelings too.

The grungy “Baby Tiger” and the shout-y “I’m Trying to Break Your Heart” bring back a wider range of nineties influences before closing tune “Dreaming On” leans towards a shoe-gaze sound. So whilst the album has its more forceful side, Wonderlust is on the whole pretty reflective, chilled out, pop rock.