RBTS WIN have debuted their video for “The Weirdo Forest”. The track is off the band’s forthcoming release Sensitivity Kit, out September 8th on Fevered Visions/Tidal Prism.

Cliff B Worsham on the video

“I wrote the lyrics for Weirdo Forest after I saw a homeless person trying to seek shelter from the rain under an awning at a shop and they kicked him out. And I thought in my head, that something that I could never do, and that everyone deserves some shelter from the rain.”

Leaving behind densely layered vinyl chops for breathable space and cassette tape field recordings to create and explore vastly more dynamic soundscapes while never eschewing their pop sensibilities. Following last year’s King Summer EP, the new album builds on the group’s transition from the densely sampled textures of ‘Palm Sunday’ to the dynamic clarity and expanded scope of their live set up, turning a corner from the Avalanches-style sampled vinyl in order to explore a more purpose-driven instrumentation. The new album is out September 8th on Fevered Visions/Tidal Prism.

Producer/Synth player Javier Bolea speaks on the objective for the new record, “We found that the most exciting pieces of music we’ve been into lately have been the space between the sounds, the silence/air between sections. So we focused on simplifying the instrumentation, at times using only noise, 808s, and vocals. Or just drums, a synth, and vocals, etc.. Really letting the space carry the feeling for the record. Maybe it’s all in our heads or way too subtle but that was the inspiration. I think those are the moments your heart sinks into your stomach.”

As comfortable warming up a crowd before a Ghostface Killah show as the are sharing airspace with Slow Magic, whispers of a follow up to ‘Palm Sunday’ have bounced around the Southeast for awhile now, especially following last summer’s ‘King Summer’ EP, as well as guest spots on random rap records and collaborations with other artists. Finally, ‘Sensitivity Kit’ shows us what the group has been developing over the past couple of years. 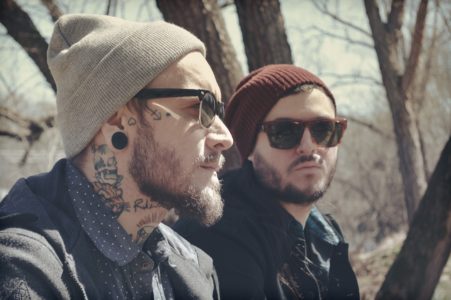