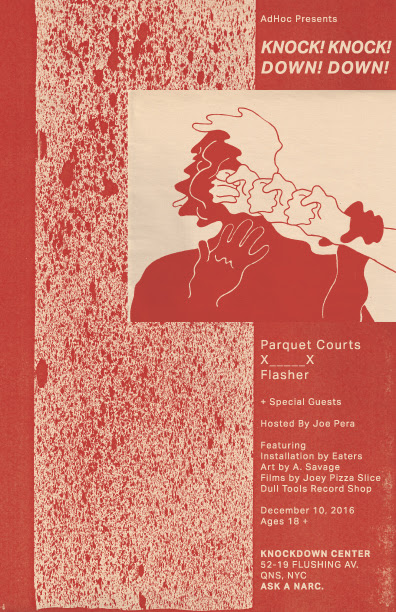 In order to cap off their remarkable 2016 in a manner uniquely suited to Parquet Courts, the band are hosting an event that brings together their DIY ethos and dedication to their musical and artistic community. Taking place December 10th at the Knockdown Center in Queens, the show will be hosted by comedian Joe Pera, and will also feature performances by X_____X (Craig Bell of Rocket From The Tombs), Flasher, and more, while utilizing the massive space to create a full multimedia experience. Other elements of the event include a sound installation by Eaters, a gallery of A. Savage’s artwork, films by Joey Pizza Slice, a Dull Tools shop, and other special pop-ups to be named later. Attendees will have nearly full run of the extraordinary space. Tickets go on sale for The Knockdown Center Show on Friday at 10AM EST. Tickets can be purchased here.

Parquet Courts are, of course, still fresh off the release of their critically acclaimed new record, Human Performance, out now on Rough Trade Records. Revisit recent performances on Conan and The Late Show with Stephen Colbert (and Bun B).