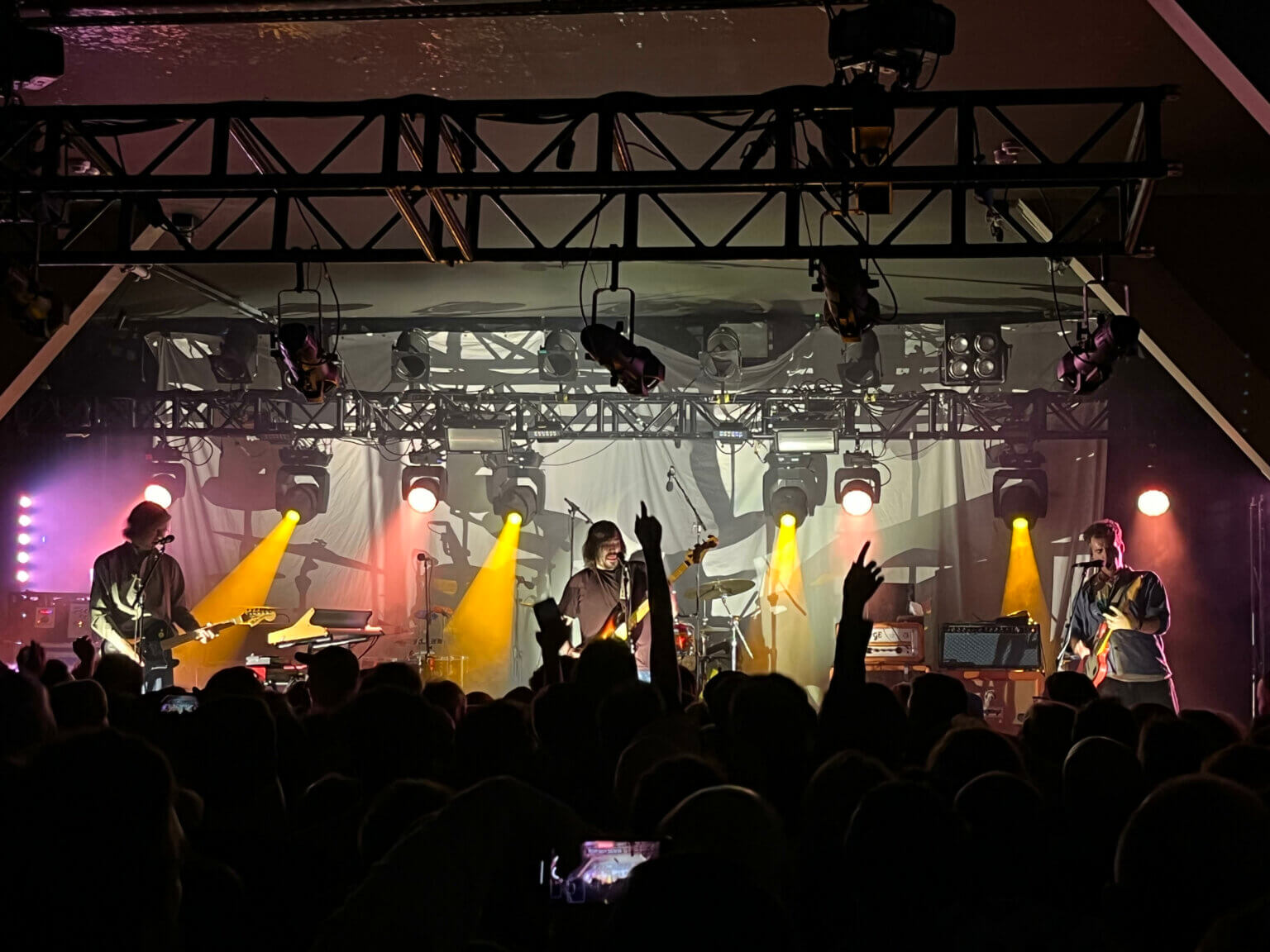 Parquet Courts live at Parquet Courts Review: Live at O2 Institute in Birmingham, England June 16, 2022 by Naomi Abbs
Share on TwitterShare on PinterestShare on PocketShare on RedditShare on FacebookShare on Email

All roads to lead somewhere and in the case of Parquet Courts, its Birmingham. The NYC four piece have been on tour constantly since the world re-opened; they’ve traversed their native land from coast to coast, graced mainland Europe with their ramshackle presence and tonight’s show culminates not just the end of their UK tour but this segment of supporting their 8th album ‘Sympathy for Life’. This sentiment isn’t lost on the band as they reference several times how good it is to be back playing shows and to be doing what they love in-front of audiences again. However, they also know they need of a short break before doing it all again in July when they take on the festival circuit in the US, Australia, back to Europe and the UK again.

Tonight’s show has a kind of last day of school vibe to it, with the foursome in a light-hearted mood as they rattle through a decent chunk of their latest record and a smattering of their back catalogue. Gracing the O2 Institute’s stage at just after 9pm Parquet Courts nonchalantly glide into the awkward mechanical groove of ‘Application/Apparatus’, which is given an elongated reimagining, cementing the group’s penchant for strung out jams. The gig’s opening track illustrates how much the unit have evolved sonically since their scrappy garage-rock days (which are represented tonight – don’t worry, I’ll get to those nuggets in a bit!) with a soundscape that’s more avant-garde and abstract than plug-in-and-play rock ‘n’ roll. The same aesthetic is portrayed by ‘Marathon of Anger’s tonal blips and bleeps, it’s as if the group are communicating via Morse code. With electronics an added factor to the Parquet Courts’ repertoire it’s by no means a surprise to see Austin Brown flit from rhythm guitar to keyboards and a flickering bank of synths. ‘Plant Life’ acts like a bridging gap between ‘Sympathy for Life’s winding jams and the freaky carnival spirit of ‘Wide Awake!’ thanks to its shoulder shuffling persona and its subtle digital nuances.

It’s not all protracted wig outs and electronic sound manipulation though, there’s a decent chunk of the New Yorker’s hour and a half set that’s dedicated to a punkish energy and of course, the dance-ability of ‘Wide Awake!’ (which goes down a storm I might add!). ‘Almost Had to Start a Fight/In and Out’ revs the up crowd for the first of several singalongs and plenty of raucous behaviour. This primal urge is then channelled into ‘Light Up Gold’ and ‘Homo Sapien’s raw appeal. It’s notable how vocalist/guitarist Andrew Savage transforms on stage once the ante is upped during the group’s livelier moments, from calm and considered to charged and snarling. The end of ‘Human Performance’ and ‘Walking at a Downtown Pace’ are given an extra shot of oomph which is greatly received by the now heaving and sweating masses. Shout out to the solitary crowd surfer too.

As the gig slithers into its last quarter and after ‘Black and White’s rambunctiousness, the aforementioned end of term vibes really set in as Parquet Courts appear to temporarily forget their playing to an audience and assume they’re in their rehearsal space. The four piece fumble about playing fragments of songs and loosely jam parts before they collapse into nothingness each time. Brown and bass player Sean Yeaton make quips about “welcome to band practice” and the like. Unfortunately this brief moment of aimlessness briefly upsets the momentum and buzz of the show, as the crowd start to grow restless; phones are brought out of pockets, chatter levels increase, trips are made to the bar and toilet. ‘Mardi Gras’ beads doesn’t do much to recapture the earlier atmosphere once the group kick back into action but fan favourite ‘Stoned and Starving’ jolts band and audience back into action. Although, gig closer ‘Pulcinella’ finishes off tonight’s show on a less than jubilant note and one that doesn’t represent over three-quarters of brilliance. That all being said you can forgive Parquet Courts for going demob happy when they know they have a month off – everyone needs a holiday right? And to be completely frank, the first three quarters of the show was superb. Go and enjoy that break fellas!