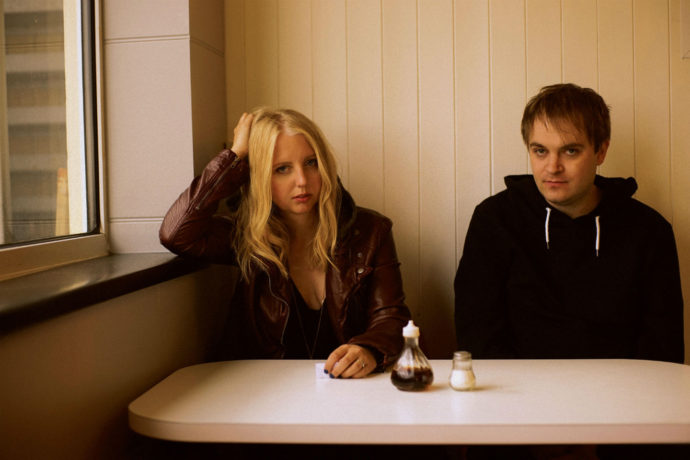 onDeadWaves is the collaborative project between English solo artists James Chapman (aka Maps) and Polly Scattergood. Maps brings an electronica-rock sound that fits alongside contemporary artists M83 (who have even remixed some of Maps’ work), and his last solo release was 2013’s Vicissitude. Polly Scattergood has an electro-indie pop sound more akin to Bat for Lashes. Her latest album, Arrows, was also released in 2013.

The two had been friends for some time before performing each other’s songs together in 2011 at the London Roundhouse—a spark that led them to begin writing music together. What started as initially directionless sessions formed a concrete sound which favors guitars and vocal duets over their usual fares. Their debut LP, On Dead Waves, released May 20. Chapman and Scattergood sat down with Northern Transmissions to discuss the formation of their band, the recording of their debut album, and the changes that have come with performing together.

NT: Congratulations on the new album! Now that it’s had a month to settle in, how do you feel about how it turned out, and the reception it’s gotten?

Polly: We both feel kinda really happy about how it’s gone. When we first started writing this record we had no real plans for it, we weren’t even thinking it was necessarily going to be even released, so to have it released on Mute, and for it to have had the feedback we’ve had from it, we’re both really happy.

James: Yeah, it’s been really great. Like Polly said, we didn’t have any expectations, we just started writing together just to see how it went, and it came together really well, so we’re pleased with the reaction.

NT: Yeah, it’s all about how you come into it. So you had your live debut together as On Dead Waves recently—how has your onstage chemistry changed since you first performed together in 2011 at the London Roundhouse?

James: It’s changed a bit, I guess cause we know each other better now. When we performed at the Roundhouse it was a good way to start the project, cause we already knew each other as friends, so it was a nice way to start working together. I mean, onstage I guess we’ve gotten more confident since then [laughs], we’ve played a few gigs now, but it’s quite a different setup from the Roundhouse gig. We’ve got a guitar and drums, it feels more like a band.

Polly: Yeah it feels more like our thing. The Roundhouse gig was us doing each other’s songs from our solo projects, but now that we’re a few years down the line, it’s our thing rather than two individuals on the stage. Like James said, we were friends before the Roundhouse, so that definitely helped the vibe onstage.

NT: What made you guys choose to form a band together rather than just have a release under a Maps / Polly collaboration?

Polly: Well, in a way it was like a clean slate. For me, I’m quite a big fan of compartmentalizing things, and when we first started this record in my head I had just been doing Arrows and James was doing [Vicissitude], and I felt it was way too early to start thinking about more Polly stuff, it just wasn’t something I was ready to do. But doing a new project, for me it allowed my ideas to be just a bit fresher, and not stuck in the same old routines, it pushed me into different places.

James: Like we said, it wasn’t really a major plan when we started writing together. It developed, and ‘live-wise’, when we developed the album we wanted more people onstage to perform a better show, and that was where the idea of the band came up—for performing. But writing, we didn’t have a master plan, it was quite organic.

NT: Compared to the songwriting of your solo projects, did you find some kind of lyrical and tonal middle ground between you two?

James: Yeah it was definitely different. I think we were both used to working alone, so that’s always a big thing, to let someone else into your process. But I think cause we knew each other already, we were able to be honest from the start. We weren’t afraid to speak our minds I guess.

NT: And you two recorded the whole album in solitude at Jame’s home studio, so you were forced to…

James: Yeah, so we had to get on with each other [laughs]. I mean we stayed in the same room for weeks.

NT: Musically, you’ve cited a lot of more poetic lyrical influences, like Bob Dylan and Leonard Cohen, but you’ve also talked about being influenced by the paintings of Edward Hopper and the photography of Gregory Crewdson. How do you feel all those influences outside of music translate into your music?

Polly: Personally, I love the idea that like—visuals and music for me are so closely entwined, and I think the same is for James. Sometimes we’d look at an image and it would say everything that we wanted to say in the song. When you look at Edward Hopper and Gregory Crewdson—just that eerie, desolate emptiness, but also very soft and kind of otherworldly. They paint pictures, obviously, but in your mind it’s a great way to start writing a song, having a visual in front of you.

James: I think the visual element was really strong with this project from the start, and we didn’t really talk very much about musical influences at all—it was more film, and images. I guess it’s cause we both have different influences, it’s a good way of translating what you want to say in a different way.

NT: So you guys are for the idea of fluidity in art? Earlier, Polly, you mentioned you like things compartmentalized—do you feel art transcends forms?

Polly: Everything; music, art, photography, it’s just entwined, and you have to really kind of live it. When I said the compartmentalize thing, to me this project is quite different from Polly and Maps, it’s a bit of a new journey, and one that we’re very much inside. Just kind of going with the flow and letting it live and breathe without thinking too much about it is hugely important. It has this energy already, like as soon as we started working together it had this sound, and we didn’t want to fuck with that too much, we just wanted to keep on going and see what happens without any pressure. Just fun and fluidity.

James: Yeah, it was just following that feeling. I think a lot of it is how music makes you feel, and sometimes you can get that from an image or a movie—it’s all related in some subconscious link, somehow.

NT: Going back to the songwriting process, you’ve mentioned On Dead Waves’ writing was guitar-led, which was different from both of your solo works. For returning to your solo writing in the future, will that have changed your whole process?

James: No, I don’t think so. With Maps there’s always been elements of guitar in there as well, but with On Dead Waves it was a different starting point, and we were quite strict on what we used to achieve the same sound with each song. A lot of it was to do with limitations, with guitar and vocals, and it went from there. Personally, I’ve learned a lot from working with Polly, so it probably will translate into my stuff somehow.

NT: So you both released your last solo albums in 2013. Are you returning to those next, or is On Dead Waves becoming your focus for the near future?

Polly: I love the idea of not having to choose one or the other. I write constantly, and I know James does as well, and we’ll always be Maps and Polly Scattergood, but right now the On Dead Waves project is taking up most of my creative energy and time, and I’m really enjoying it—from the live side of things to the recording. I’ll still continue to write my own stuff, and I’m sure there’ll definitely be another album at some point, I just don’t know when [laughs].

NT: So once you’ve written something, do you choose where to take it—as a Polly thing or an On Dead Waves thing?

Polly: No, no, no. With the On Dead Waves project we’d sit in James’ house and write together. It was never something that I’d written at home with my piano or guitar. We know when we’re writing an On Dead Waves song that that’s what it is, the same with solo material.

James: I’ve never really stopped [laughs] with Maps stuff either. I don’t see a choice between one project or the other, I mean like Polly said On Dead Waves is taking up most of our time, but I’m still writing Maps songs whenever. I’m sure there’s more to come in that department.

NT: Polly, you’ve said before that you’re interested in making music for film/television and even in writing a book of poetry—where do you see that fitting into your future with music? Do you see yourself devoting all your energy to that at some point?

Polly: I have this deep love for words and poetry and film… yeah it’s weird because it sounds, I don’t know, all over the place. I enjoy creating stuff, whether it’s poetry, music for a film, or an album. I like having those different outlets, and I’ve used them at different points in my life. Sometimes, when I can’t write music because I’ve gotten a block, that’s when I sit down and start writing the words, because they usually come, even if it’s in an ironic way. I think most creative people, most artists, find their art in different places. The one thing I think I’ve learned is there’s absolutely no point, if you haven’t got the inspiration, to force things. I take the energy and inspiration as and when it comes, even if that’s—you know I’m not good at painting, but if that’s how I need to get it out, that’s good.

NT: How about you, James? Any projects outside of music in the future?

James: Generally music takes up all my time, but I’ve also had the idea of writing for film at some point. I think as the years have gone by, it’s best to do different projects. For quite a few years, Maps was my sole project, but I enjoy doing different musical projects, and hopefully that continues—I mean I can’t paint [laughs].

Polly: We’re hoping if we say we want to write for films in enough interviews, someone’s gonna ask us [laughs].

NT: So, any last thoughts or final messages for the readers?

Polly: I guess we’ve got the new single coming out, the video’s just gone up online for “California”, and it was directed by GroovyChaos and it’s kind of fun and summery, if people are looking for a summery tune to check out. And thanks to everyone who’s come to the gigs in the last week.

James: —hopefully we’ll make it over to you at some point for gigs.

Polly: Yeah, thanks for the support.