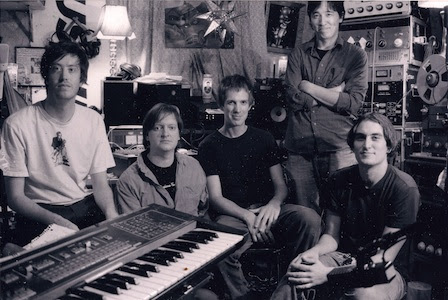 Okkervil River has shared a three part mini-documentary that captures a behind-the-scenes look at making Black Sheep Boy. They’d almost forgotten it was filmed, let alone that they’d kept the footage. Filmed (mostly) by Zachary Thomas, a founding member of the band, the video lets us step inside the little tin shack where these songs came to life. The hours of home-video recordings have been culled by Will Sheff into three distinct chapters: Part 1 – Learning The Songs, Part 2 – Recording, and Part 3 – Finishing The Album.

On our first day of rehearsing the songs that would go on to become our album Black Sheep Boy, Zachary Thomas showed up to the little tin shack out by the Austin Airport where we were rehearsing (and where I was living) with a little consumer-grade miniDV camcorder in his hand.

Our original bassist and one of the founding members of Okkervil River, Zachary was a new father and had bought the camera to document the arrival of his son Graham into the world, but he figured he’d bring it to a couple of rehearsals and studio sessions. I actually remember being a little annoyed at him pointing the camera at me – I was feeling thin-skinned and was obsessing about making Black Sheep Boy into the album I dreamed it could be, and when I noticed I was being filmed I would often get self-conscious and distracted from making the record. Pretty soon, though, I started enjoying waving the camera around or else I would just kind of forget it was there.

When Jagjaguwar asked me earlier this year if I had any interesting artifacts from the making of Black Sheep Boy – photos or video footage or bonus tracks or anything – I initially told them no, because I had forgotten all about that little miniDV camera. I finally remembered, contacted Zachary in North Carolina, where he now lives with his wife and three children, and sent him on an errand digging through his house for the tapes.

It took some doing but he finally found them and mailed them to me and, once I managed to borrow a miniDV camera and figured out how to get them onto a hard drive (thanks to Nate Fernald and Lisa George-Decker), I discovered several hours of charmingly rough home-video footage covering rehearsal for the album, the recording of several of the songs in producer Brian Beattie’s house and garage studio, and the mastering and sequencing of the record during a torrential rainstorm in Wimberley, TX near the end of the year.

It’s so funny to me now that I was ever irritated or psyched out by that little camera because now I’m so grateful it was there. Watching this stuff again really rocketed me back in time. Thanks Zach!