“You Are An Ocean” by Beams

Beams, has bean a very busy band. The group released their sophomore album Teach Me To Love on February 23rd, followed by a lengthy tour across North America. During the writing of the album lead singer/ songwriter Anna Mernieks went down a mental spiral that wreaked havoc on her personal and artistic life. This spiral led to Anna cancelling her wedding with bandmate Mike Duffield, but the crisis encouraged her to deal with her depression while simultaneously sparking the concept of the record. Two years in the making, teaming up with Ian Gomes (Hooded Fang, Odonis, Odonis), and Peter J. Moore (Neko Case, Cowboy Junkies). The band’s video for album track “You Are An Ocean” was made by Christopher Mills who previously worked with Modest Mouse, Interpol, Leonard Cohen.

Mike Duffield on the video:

“The video plays on the song’s themes of isolation/immersion and the cyclical nature of life with Anna as the protagonist, existing as big as a celestial object and small as an atom.” 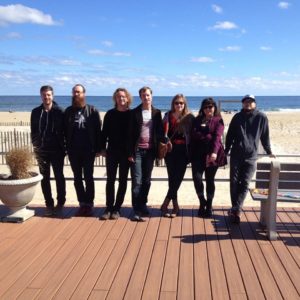 “You are an Ocean” by Beams