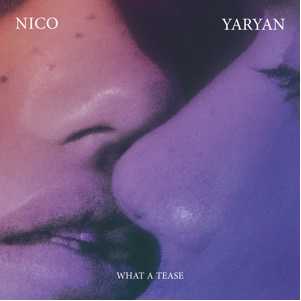 Today, Nico Yaryan, shares his new single, “Old Gloria”, from his forthcoming debut release, What A Tease, set for release on February 26, 2016 with Last Gang /Partisan. Yaryan said of the track, “Old Gloria is a sympathetic story about a dreamer who lost her way.” On this debut album, Yaryan sings of the hope, elation, sadness and confusion that comes with falling in and out of love.

Yaryan began as the son of Northern California hippies, a creative kid who cut his musical teeth on drums and midi samplers, digging through dollar-record bins and dreaming of producing hip-hop beats worthy of his idols, like J Dilla and DJ Premier. He would pass a few cavalier years of adolescence and early adulthood (as he tells it) “sort of sidetracked, working retail jobs, and skateboarding, and riding bikes, and drinking, and being a kid.” But that changed when he joined Hanni El Khatib, a close friend from high school, as a tour drummer.

What a Tease asks the questions: How far would you go to be with the one you love? And what would be enough to tear you apart? These questions led Nico Yaryan down the long, arduous, but beautiful road that produced this debut album. The record came to life during the months Yaryan tried to keep a transcontinental relationship afloat after falling in love with a girl in Amsterdam while touring overseas. Upon returning home, he took a job clipping weed in Northern California to save money to go see her.

Meanwhile, as their relationship unfolded in the face of geographical (and financial) adversity, so did the songs that would become What a Tease. Opening with the tattered allegory of Old Gloria and the lonely masochism of You Belong to Me, the record lets more than a little darkness surface: the agony of watching yourself mess up a good thing became Just Tell Me; the shifting nature of success informed Dreamers; mistrusting the nature of his love led Yaryan to Witch Love. But throughout, there’s an undercurrent of perseverance and determined tenderness, songs like the cavernous Infinity and, perhaps especially, album-closers Your Love Never Lets Me Down and I’ll Stay With You When You Die.