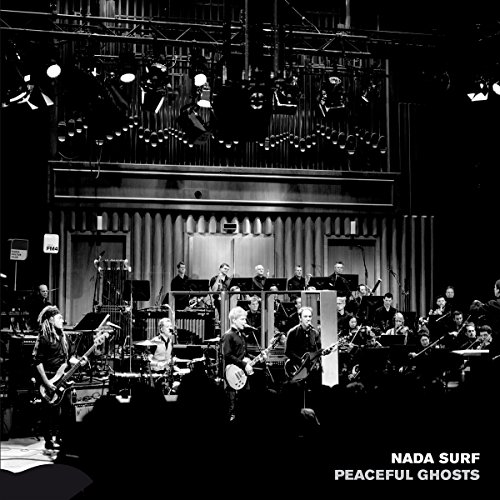 Nada Surf are streaming their new live album Peaceful Ghosts, which was recorded this summer with accompaniment from the Babelsberg Film Orchestra. The album will see a release on October 28th via Barsuk Records.

Peaceful Ghosts came about after frontman and main songwriter Matthew Caws received a surprise email asking about a potential collaborative orchestral project from the Austrian national radio station FM4. A little over a year later, the result is a recording, culled from two live performances in Vienna and Potsdam early this summer, that covers a broad stylistic range, from James Bond at one extreme to the joy and wonder of Walt Disney at the other, with a whole range of surprises in between. Classics such as the delicate melancholy of “Blonde On Blonde” unfold to surprising new places with soaring countermelodies, while new favorites from You Know Who You Are, including “Rushing” and “Out of the Dark”, showcase the power and majesty of the original without losing the lyrical and musical subtlety that has become the hallmark of Nada Surf for the past twenty years.

In the summer of 2015, Caws was sitting at his kitchen table in Brooklyn, frantically writing what would become Nada Surf’s seventh album, You Know Who You Are (2016), when an email arrived that would delight and terrify him. Once a year, FM4 in Austria chooses an artist for a national orchestral concert that’s broadcast across the country, and they reached out to Nada Surf asking if the band would like to be the next. Soon after receiving the FM4 request, the band secured a similar offer from Radio Eins in Berlin to perform live on air with the Babelsberg Film Orchestra, which derives its name from and is affiliated with the legendary Babelsberg Film Studios where notable films such as Metropolis, Dr. Mabuse and The Blue Angel were made.

“If we said yes, we’d have to choose a composer to write the parts and then decide which songs he or she should write for. We’d have to decide these things soon. Well, that was out of the question,” recalled Caws. “Deciding what kind of Thai curry take-away I should get that evening was about as distant a decision as I could imagine, while the small matters of which songs would go on the new Nada Surf record, who would mix them, what the album would be called and what the final verse of the song I was working on right then would be, loomed ahead. I would try and answer these questions after that curry, but making decisions about a concert months later was more than I could handle.”

Instead of passing up the opportunities, Nada Surf asked their good friend, multi-instrumentalist Martin Wenk, whose own band Calexico had done the FM4 Vienna Radio Symphony concert in 2013, to oversee the details with composer Max Knoth, while the band focused on putting the finishing touches on You Know Who You Are.

For those of us unable to make it to Europe in June 2016 to listen to the fruits of this collaboration either in-person or over the airwaves, the band is making it available now with their album Peaceful Ghosts.