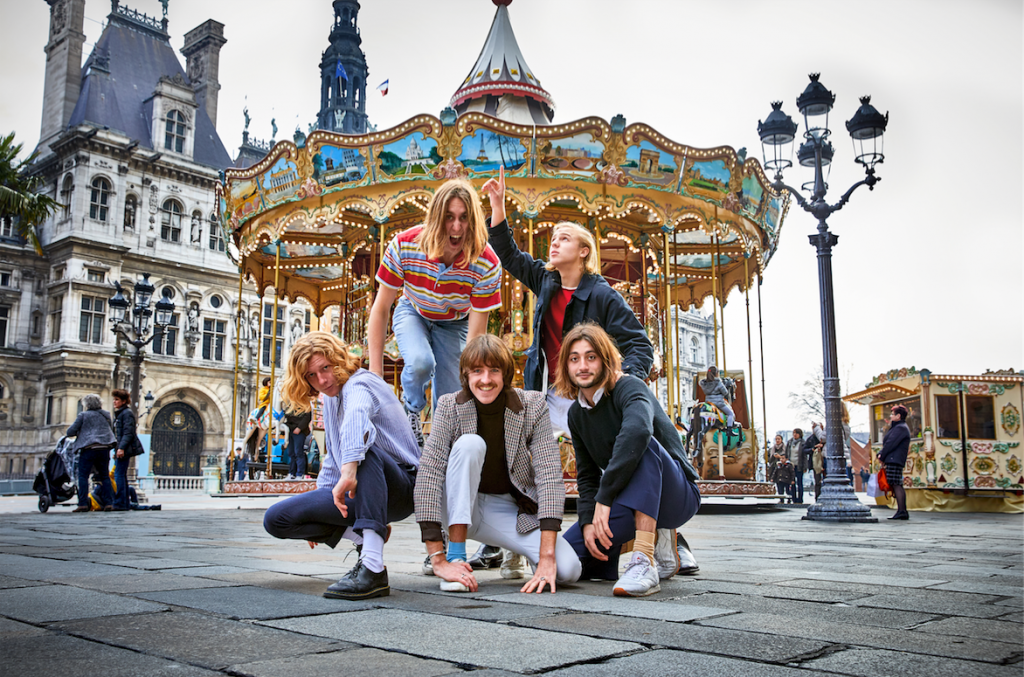 Though they’ve only been making music together for a short amount of time, Australia’s Parcels are already sounding tighter than many of their older peers. As the band’s disco-rock sounds expanded they’ve even caught the attention of Daft Punk, and worked with the French duo on a single. We caught up with the band from their new Berlin home ahead of a big European tour to talk about the roots of their sound and where they’re taking disco today.

Northern Transmissions: Since you all met and started in Australia what led you guys to move to Berlin and what has that meant for your careers?
Jules Crommelin: What led us to Berlin was really absolute ignorance. We were all in other bands, and we started Parcels with six months until we were left. As Australians you always have a bit of an urge to leave the island. We heard about Berlin being a cheap place, and this band The Whitest Boy Alive was living there so we moved to Berlin. It was probably the best decision we ever made. We only had contact there with a manager at the time, but we worked it out. It made it though so we could focus on all of Europe instead of just Australia, since there’s not too many place to play there.

NT: How did your collaboration with Daft Punk come about and what was the chemistry with them in the studio?
JC: It was quite incredible. They came to our first gig in Paris, and just got inspired by what we were doing. I guess there’s not that many live band making our kind of music. It was such an organic from the start to collaborate with them. It’s hard to explain it because it really felt like a dream to us while we worked with them, and it still does. We learned so much from them. There was no ego involved at all, it was about making a song together. They just really appreciate real pop music.

NT: I thought it was interesting how many session bands you talk about taking influence from, what about them inspires you since you’ve mentioned you care more about gelling than actual musicianship?
JC: The interesting things about these artists was that recordings came first, it’s just musicianship and recording. You can’t beat these kind of bands, like Steely Dan’s recordings from the 1970’s are just absolute perfection. They just gelled pop music and influences from all over. I grew up listening to Steely Dan and they would just get all the best musicians from around their area, just like Daft Punk.

NT: Something that makes your music stand out is how perfect every detail is, so how do you keep this from feeling dull and what challenges did you face creating a live set?
JC: In the end it happened naturally, because when we record music, we try and do it live. We hadn’t done that as much for our past EP but we’re doing it a lot with what we’re writing now. It’s all about trying to keep things so we can play it live. That solidifies what’s possible and allows us to focus on the finer details. You record it live and realize what isn’t working, and try to fix it all working together.

NT: Listening to what you do now, most people wouldn’t assume you started in folk and metal bands, so what led you to this groovy disco sound?
JC: It ended up being a bit of a full-circle thing for all of us. I was in the metal band and the other guys were in a folk band. When we came together in school, we were jamming a lot in the music room. What brought us together was an appreciation for groovy music, which expands beyond what we do now. This kind of music is really what we were all brought up on, which is what I mean for it coming full-circle. I got into metal when I was 15/16, but we all came back to what we listened to as children which was funk and disco. I listened to a lot of David Bowie and my parents pop and disco records.

NT: Looking at your Hideout EP, how did basing it around a character help you shape the music and how did exploring the studio on that record help you evolve?
JC: As far as the lyrical content, we didn’t write around a character, we were more just writing songs in our bedrooms alone. When you write songs alone it’s usually pretty personal. So in the end the lyrical content for the album was more of an internal struggle. It’s a lot of battling with your own thoughts. We took all those bedroom recordings and re-recorded in a studio and we learned a lot of each other from that album.

NT: What did you guys want to do differently with your new single “Tieduprightnow” and is this a hint at upcoming material to come?
JC: It’s a hint on what’s to come for sure. It was us figuring out who we were more as a live band. What we’re working on with this album right now is what we do live. There’s more energy and fun when we play live so we wanted to do it that way. The album is going to be pretty diverse, and we’ve learned a lot recently, especially after working with Daft Punk. We haven’t been playing together that long so every song is really a wealth of information.