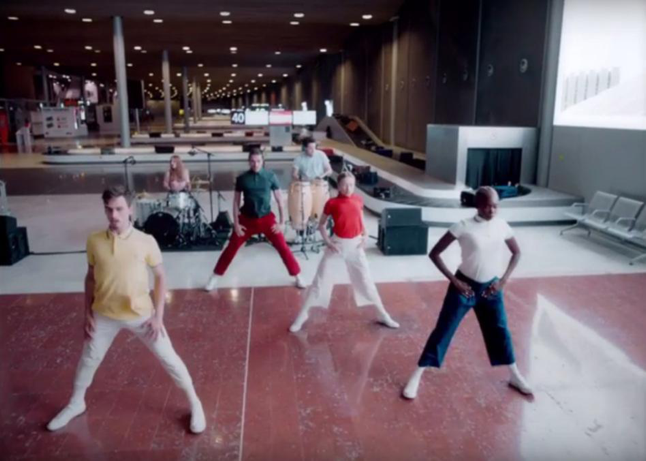 Directed by Colin Solal Cardo (whose previous credits include videos with a similar aesthetic style for Benjamin Clementine, Phoenix and Lianne La Havas) and in collaboration with Paris Aeroports, the video captures a stripped-back Metronomy consisting of Joe Mount (vocals/synths/percussion) and Anna Prior (drums) performing the track in the unlikely setting of a baggage reclaim area within Terminal 2E in Paris’s Charles de Gaulle Airport on July 4th of this year. Mount explains, “I love one-take videos and I love aeroplanes… and airports. I also love it when you start something with modest expectations and they are exceeded. I’ve always quite fancied doing a live music video and this was never really meant to be that, but it kind of is now.”

Their performance is matched by the visual spectacle of four dancers who were choreographed by I COULD NEVER BE A DANCER to create one of the most striking session performances of recent years. Consisting of Carine Charaire and Olivier Casamayou, I COULD NEVER BE A DANCER are an unusual and polymorphous artistic duo using dance as one element in a visual whole that is both conceptual and pop. The duo are choreographers, film directors and artistic directors, and sometimes all three at once.

In addition, next week will also see the release of a new ’16 Beat’ remix courtesy of influential French electro duo Cassius. Metronomy’s original track is a paean to Mount’s favorite drum machine which is rich with language that befits a more conventional love song. Cassius’s interpretation focuses upon Mount’s vocals which are chopped into a swirling hypnotic groove before the track is deconstructed with doomy synths, distorted vocals and skittering percussion.

Both artists are fans of each other, and Metronomy recently remixed Cassius’s track ‘The Missing’ – the original of which features on their brand new and long-awaited album Ibifornia.

Entirely written, played and produced by Mount himself, Summer 08 finds the multi-instrumentalist reflecting on his experiences around the time that Metronomy first landed a major breakthrough with the Nights Out album – the guilt at spending key moments in loved ones’ lives in the back of a tour bus.