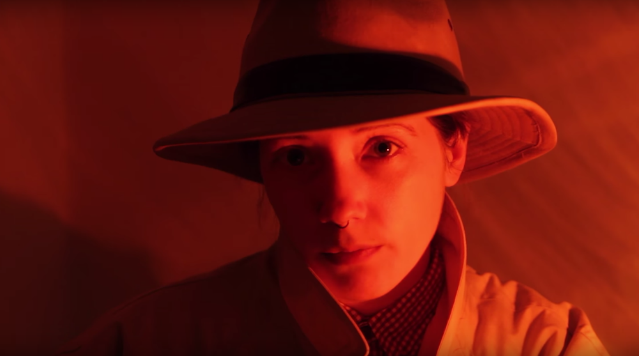 Martha recently announced their forthcoming Blisters In The Pit Of My Heart album and now they are back with the first video from the release.

Martha return with their second album Blisters In The Pit Of My Heart on July 1st, via Dirtnap Records (US) and Fortuna POP! (UK/EU). Produced again by MJ from Hookworms, the album explores the difficulties in staying political, staying passionate and staying punk over the course of eleven expertly crafted pop songs.

Hailing from Pity Me near Durham England, Martha play energetic, impassioned power pop with intricate vocal interplay and lush four-part harmonies, informed by 90s indie rock and contemporary garage punk. The band is comprised of J. Cairns (guitar), Daniel Ellis (guitar), Naomi Griffin (bass), and Nathan Stephens Griffin (drums). All four members sing and write the songs. Daniel and Nathan also play in Onsind, while Naomi also plays in No Ditching. Their debut album “Courting Strong” came out in 2014 and was included in NPR’s top 50 albums of that year, winning them the epithet “One of Britain’s best rock bands”.

“Goldman’s Detective Agency” shows the band’s playful side as they re-imagine 19th century anarchist Emma Goldman as a private eye vanquishing corrupt cops and politicians. Every song on Blisters In The Pit OF My Heart is a potential single, from the infectious “Do Whatever” and “11:45, Legless In Brandon” to outsider anthem “The Awkward Ones” and the Billy Bragg / Coronation Street-referencing “Curly and Raquel”. The album concludes with “St Paul’s (Westerberg Comprehensive)”, a song about being caught up in the toxic culture of a Catholic comprehensive school. “It’s for the kids who had the guts to be queer at school and for those who didn’t figure themselves out until they got out of school. ”

Following a Glastonbury appearance last year at the personal invitation of Billy Bragg, the band will be playing UK dates in July and August before taking to the stage at End Of The Road in September. It’s going to be a busy old time for the band, what with double lives and everything, but, with passion and love dripping out of every second of Blisters In The Pit Of My Heart, you know they’ll find a way.