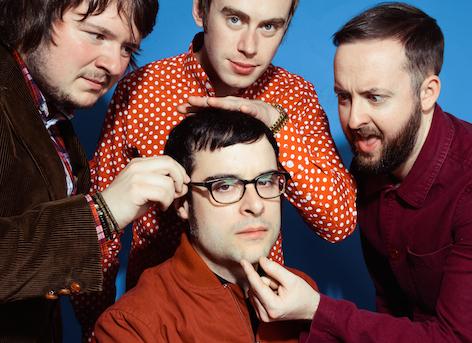 Warrington, UK based band Man & The Echo are back with “I Don’t Give A Fuck What You Reckon,” an amusing track that takes aim at modern society in the digital age. It was produced by the band themselves and mixed by Neil Comber (Django Django / MIA).

“‘I Don’t Give A Fuck What You Reckon’ isn’t an angry song, it’s an exasperated one,” explains front man Gaz Roberts. “And it’s not angrily exasperated, but bemusedly so. No aggression or violence is meant towards you for sharing your inane opinions, your photographs of your mediocre dinners, the fact that you have read something, or how funny you think your kid is. I just want to extend to you a message, that when you decide to share something to feed your own narcissism, to cultivate an idealized perception of yourself, or because you saw something and immediately formed a half baked opinion that you are absolutely certain of, I don’t give a fuck. Consider this song my eternal status. And enjoy your cocktail.”

Man & The Echo recently signed to A&R man James Endeacott’s rejuvenated 1965 Records label last year. Their last single, (‘All Right’), a tale of kidnap set in a fascist rural village. It was released in June ahead of dates at Glastonbury.

The band is currently back in the studio recording their debut album, due for release in 2016.