“All My Lovers” Starchild + The New Romantic 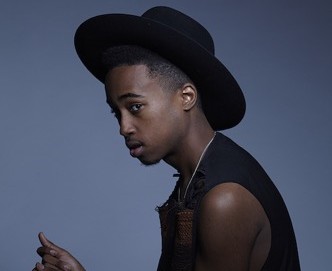 Ghostly is happy to announce their newest signing, Starchild & the New Romantic – the musical moniker of Bryndon Cook and his backing band. With today’s announcement he shares his single “All My Lovers,” the first cut from his EP Crucial, due for release early 2016.

Next Week, during CMJ at New York, you can catch Starchild at the Ghostly Showcase at Cameo Gallery on Thursday, October 15th.

Cook describes his music as “Champion Music for the Heartbroken.” Drawing equally on electro and R&B, with silky sheets of synth cascading over rubbery bass lines, each song spikes lithe vocal melodies with an undeniable twinge of sadness. Starchild’s music reflects not only his heart, but his experience: he was a touring member of Solange’s band when he was in his second year of college. He’s also toured with Kindness, and has collaborated with Dev Hynes and Patrick Wimberly of Chairlift. “Patrick might have been the first person, outside of my family, to extend an unconditional love and interest in my future,” he says. It was Wimberly who introduced Starchild to Solange, who instilled another valuable lesson. “Solange taught me that if you stay true to yourself, you can take all the time in the world to do one special thing, the right way.”

Starchild’s music strives to be that special thing. Reflecting the omnivorousness of one of his heroes, Prince, (“I look at him as a genre. Within the genre of Prince, there is so much to discover”) it swings from sweet and soulful to loose and funky, every note arranged and performed by Starchild himself. “All My Lovers” falls into the former camp. “I have, admittedly, a very obsessive nature, mixed with a lot of genuine, passionate care,” Starchild says.

“This song reflects that fact in as heartfelt a way as I possibly could during my college years.” Though the final product is a quietly-pleading R&B slow-burner, it began taking shape while Starchild was recording rap verses for his EP Night Music. “I started writing the song during my second year at SUNY Purchase, and I thought, ‘Beyonce could sing this.’ The end result is sweet, graceful, engrossing and, above all, coursing with emotion. “I always appreciated music that lent a helping hand and said, ‘Hey, are you with me? Because I am with you,’” Starchild explains. “I hope I can do that for someone, somewhere.”

Starchild & The New Romantic will release Crucial in early 2016.