3 months ago
Words by James Olson 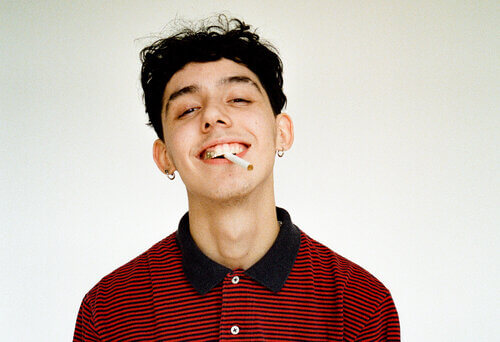 A quote attributed to a few different people says that you can get through life by either laughing or crying. Life can be so cruel, so chaotic, and so utterly absurd that it can feel like one big cosmic joke.

Up and coming Toronto based experimental rap artist DEAR-GOD chooses to laugh, to weaponize satire as a means to highlight the prevalent injustices in our world and to encourage change. Born in the suburban Canadian city of Brampton outside of Toronto, Robert Ortiz (a.k.a. DEAR-GOD) occupies his own musical corner with his lo fi fusion of hip hop and punk. His debut single “The Burbs” features all of the characteristics that make up this mash up sound with its breakbeat drums, unyielding bass riff, and snotty vocals.

The genesis for this sound comes from Ortiz’s mixed musical heritage, essentially raised on rock and weaned on rap. “I grew up around a lot of rock [music] through my family. My family is super into rock. But at the same time all my friends in school were listening to hip hop” Ortiz explains “Brampton is a place where everyone raps, everyone wants to be a beatmaker here. I feel like DEAR-GOD is a mix of the identity I had growing up here where everyone is into hip hop and so am I, but I also want to make rock music. I love having a band around me and I love that energy in its own way.”

While there have been a number of rap/rock fusion acts over the years, hip hop and punk have not crossed paths as frequently as successfully, a trend that Ortiz looks to buck. Philosophically speaking, Ortiz opines that “Rap is punk. It’s always been punk. It’s always had the same energy as punk just presented in a different way” musing that both styles have served as a vehicle for progressive youths and minority groups to speak their mind and fight the power. Hip hop for Ortiz has always been a part of his musical identity while punk has become an ethos that has pushed him as a working-class adult to express himself in an aggressive and raw fashion.

Brampton holds a special place for Ortiz as he cites up and coming hip hop acts like the now defunct Way Cool collective and Sean Leon as sources of inspiration to start and stick with his musical journey.

However, the suburbs themselves serve as a big target for the young rapper’s particular brand of satire.

Look no further than his video for the aforementioned single “The Burbs,” a woozy and grimy clip in which Ortiz and his band invade an otherwise peaceful suburban home whose residents quickly descend into depravity. As a former suburbanite, Ortiz is all too aware of the bigotry that permeates the life of the “nuclear family.” Undercutting familiar media depictions, Ortiz says “In reality, these are the most close-minded individuals who will lie to themselves and will try and tell themselves that their doing good for society and that they aren’t racist or homophobic.”

Even in a relatively sheltered community like Brampton, Ortiz acknowledges that young adults and teenagers today face unique challenges with their mental health. Along with over socialization and over stimulation, hyper awareness of all the world’s problems to Ortiz creates take its toll particularly on his generation. The satirical bent to his lyrics and videos serves as a means to connect with people his age and younger who might not want to acknowledge the serious issues prevalent in modern life. Through satire, Ortiz explains that he wants to say that “we can make something out of this, to laugh at the fuckery going on, and to not let it stop us from being powerful in what we want to portray and what we want to say.”

With his fourth single “Lovin’ It” dropping at the time of writing and an EP set for release in the near future, DEAR-GOD will have plenty to laugh about as he skewers the absurdity that is living through these strange times.