Spending a day in the life with an unnamed Toronto Island tour guide, the band’s members joined director and fellow skateboarder Aidan Johnston at 6 a.m. to travel to the shoot via ferry in March’s frosty weather. Filming on bicycle, they followed this eccentric character from the scenic locations of a haunted lighthouse to the beach where he dances with LFO on his headphones and joins island residents in a Christmas tree bonfire.

Toronto’s Jiants combine infectious riffs and melancholy melodies with the sun-cracked vocals of former pro skateboarder Jesse Landen. Their sophomore album Odd Trouble captures a nostalgic sound from a time that may have never been, inspired by beloved bands such as Nada Surf, Built To Spill, Archers of Loaf, and Dinosaur Jr.

In his previous life, Jesse Landen toured the world on four wheels while earning sponsorships from Vans, Billabong, and ATM. After traveling from his home in small town Ontario to the skateboarding meccas of California and Barcelona, an ankle injury requiring surgery forced him back to Canada to utilize free healthcare. During the downtime of his recovery, Landen began writing the songs that would become his first project Born To Busk, releasing two albums in 2004 and 2007, later followed by the band Stanford.

Jiants began with the release of their self-titled debut in 2016. The album was accompanied by a video for lead single “Paralyze” produced by Landen’s film production company The Filmboard, whose short film Grinders previously won first place in Converse and Kingshit Magazine’s 2014 Connect the Dots contest. In 2018, The Filmboard would go on to produce the video for Arts & Crafts signee and fellow skater-led band Reuben and the Dark’s song “Dreaming.”

Jiants have now become a full four-piece live act with Landen joined by lead guitarist Joe Delfin, drummer John Sirdevan, and bassist Adam Kesek, co-owner of Canadian music book publishers Eternal Cavalier Press. Pushing the band out of the bedroom and onto the stage, they have performed at festivals such as CMW and Indie Week while shared stages with Taylor Knox, Reuben and the Dark, and the Constantines’ Bry Webb.

“Skateboarders have always been ahead of the curve as far as documenting everything in their lives,” says Landen. “It attracts a certain kind of person and gives you a different outlook about the ways that you might not fit into society. When you’re out skating, you always have a camera and are spending time with people who are up to shenanigans. Filming and editing are a part of the lifestyle, and it’s really not hard to move that into making something more artistic. 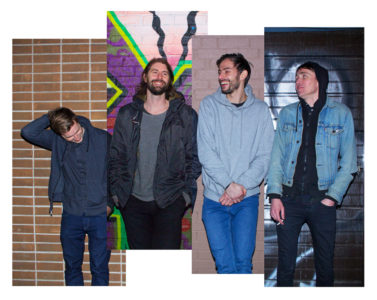