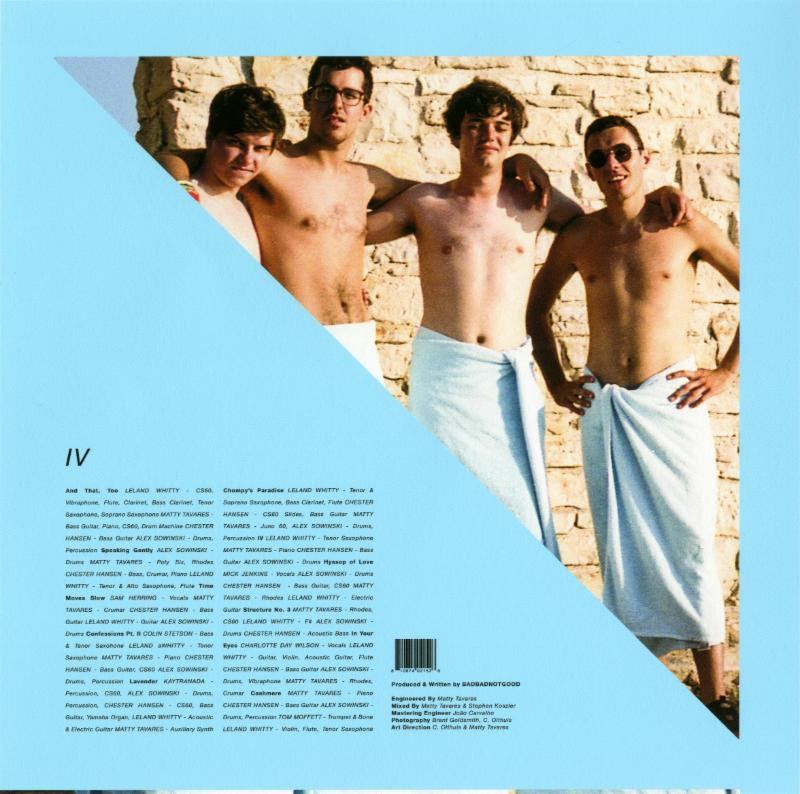 BADBADNOTGOOD’s collaborative spirit is soaring these days. Following last year’s much acclaimed Sour Soul album between the then three-piece Toronto jazz unit and Wu-Tang rapper Ghostface Killah, the outfit’s internal makeup has shifted. Most notably, long after first guesting onstage alongside keyboardist Matthew Tavares, bassist Chester Hansen and drummer Alexander Sowinski–not to mention popping up in limited capacities on their earlier records– saxophonist Leland Whitney has now been brought into the BADBADNOTGOOD fold as a fulltime honker. The title to the group’s new album, IV, is fitting in that it reflects the expanded lineup, as well as the fact that it is the fourth proper full-length from the adventurous, head-bobbing combo. But, as you quickly learn about the outstanding release, there’s actually quite an abundance of talent involved.

Concentrating on the core group, this latest batch of numbers find the foursome exquisitely exploring anything from sweat-beading prog-jazz to fully-smoothed out R&B. “And That, Too” opens it all on a soft-but-swerved note, the tune coming together via blissed-out synth tones and a subtle but hard-earned bass groove. “Speaking Gently” follows suit with a minimal, peak period Galt MacDermot-leaning keyboard intro before latching onto a whimsical whirl of IRL drum breaks and wind instruments. Later, the intoxicating lounge piece “Chompy’s Paradise” brings now on-the-books Whitney’s seasick sax work to the forefront, each queasy blow further lulling you into a late night daze as if popping full hands of Ambien between sips from a pitcher of Blue Hawaii’s.

Flipping the feel to something a bit more manic, IV’s title track initially rolls itself out as an explosion of quickly thwacked snares, globe-trotting walking bass and complex keyboard chords. It simmers down momentarily into an ash-dangling arrangement, but the ebb and flow of the piece ramps it back up into a quivering mess before exiting with a solo from Whitney.

And then there’s the guest spots. On an especially more ecstatic note, much-hyped sax man Colin Stetson delivers a fluttery, finger-clacking performance on “Confessions Pt. II,” his cheeks likely fully puffed-out in the booth during each brassy, baritone horn boom.

Future Islands singer Samuel Herring is the first extra to contribute vocals to IV, not to mention any solo BADBADNOTGOOD album, he abandoning his oft dramatic mix of new wave crooning and death metal growls to enter the role of a honey-voiced soulsmith for “Time Moves Slow.” Here, he waxes lovelorn over a lax and elegant arrangement, instilling the deep-sighing unease of waiting around by the phone for that someone to ring you up. “Time moves when you can’t have a thing,” he philosophizes sweetly, sadly.

Charlotte Day Wilson takes a different approach on “In Your Eyes,” her thick-and-hearty vibrato on the strings-loaded R&B piece coming across much more positively as she details bashful admiration and devotion to another. Splitting the difference, a cautious Mick Jenkins weighs in on the “different kind of high” our emotions give us on “Hyssop of Love,” likening their addictive properties as being “like a drug.” On that same track, Jenkins reports of a situation: “I heard your plug was dry and I think I got what you need.”

BADBADNOTGOOD themselves have stepped up their game, diving deep into a well of inspiration for IV and coming out with their most cohesive release yet. 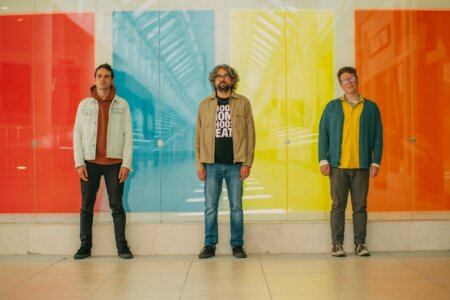