Interview With Jack Cooper from ‘Mazes’ 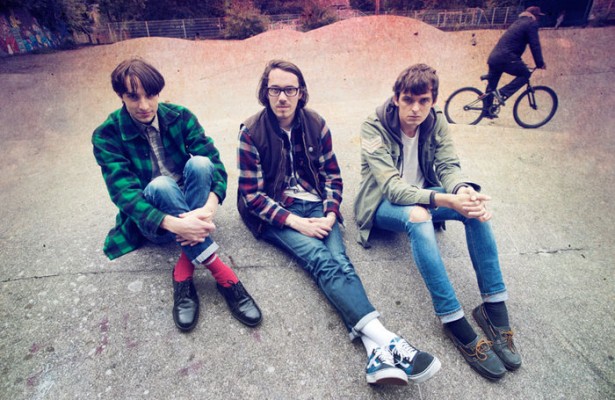 Jack Cooper from the UK band ‘Mazes’ was cool enough to answer some questions, minutes before he and his band’s gig with Parquet Courts. ‘Mazes’ upcoming album Better Ghosts comes out November 11th on FatCat.

NT: The album Ores And Minerals was truly a guitar lover’s album. Can we expect a bit more of the same thing on the new album Better Ghosts?

JC: Well the manner in which we recorded that record lent itself to a lot of layering and overdubbing, so yeah it ended up quite guitar dense. If that’s what you mean than I guess this mini LP and the album we’re currently rehearsing are the opposite of that. When we started interpreting Ores live it was impossible to replicate the density of the guitars, so we stripped everything back. The idea moving on is for the next record to be made of songs that we can record live… the Better Ghosts thing is a step towards that. But if you mean ‘a guitar lover’s album’ in that there’s some interesting guitar work on it, then I’ll take that as a big compliment ha.

NT: On your last tour the band tended to play songs from Ores And Minerals quite a bit differently live, do you enjoy experimenting with different arrangements?

JC: Absolutely… I think we’ve got to a point where we have it all down enough to take songs in weird directions. I think we’d like to do that a lot more. But y’know I’m sat answering these questions backstage in Munich. We’re on tour with Parquet Courts and we have to play a pretty tight 30 minute set, so there’s really not much room for veering off. That can be cool as well though… Maybe trying to give the songs a different energy?

NT: The new album sounds like it was a bit more of a collaborative effort, how was the recording process different?

JC: On the first record back in 2011, the songs were almost entirely fully formed. And then on Ores the songs were constructed around loops and I think of that record as being a mood board of how we want to sound in the long run. With the new stuff, I’m still bringing in the seeds of songs but we’re collaborating a lot more in the arrangement and vibe. Neil and Conan both have really great taste.

NT: That does look like ‘Donovan’ on the new album cover, is it really him? How did he end up there?

JC: It is him. The song Donovan on the LP is by a band called Yellow Fever. We were playing it through 2012 and we really weirdly met Isabel from that band whilst she was playing bass with Frankie Rose. She was pretty blown away we were doing it. We thought we’d record a version because the song strangely ties a lot coincidences together. Lots of mutual friends.

NT: You guys are fans of the Ghostbusters’ Movies, was the album title really influenced by one of the films?

JC: Just in that Conan thinks Ghostbusters 2 is better than the original. He said it had ‘better ghosts’ and I though it was funny. It’s just a flippant title that doesn’t really mean much except it provokes a few questions. I disagree with him though by the way.

NT: Where is the shot of the triple bunk bed on your website? I’m not sure I’ve seen one before.

JC: Yeah that was a trip… It’s at a band apartment at a venue in Vienna. I’d never seen anything like it either. The venue was based in an old abattoir that’s was then a squat… that kinda thing. I will say though, it’s not the worst place I’ve ever stayed… better than a lot of people’s floors ha.

JC: Oh man… everything and anything. I’m particularly into the Jessica Pratt LP at the moment and I’ve gone back to Fugazi’s Instrument LP, which is my current go-to if I’m writing or replying to emails. I have to listen to instrumentals if I’m reading or writing. I’m dyslexic and listening to words and trying to write is just something I cannot do. I listen to 5 records a day that I take something from though.