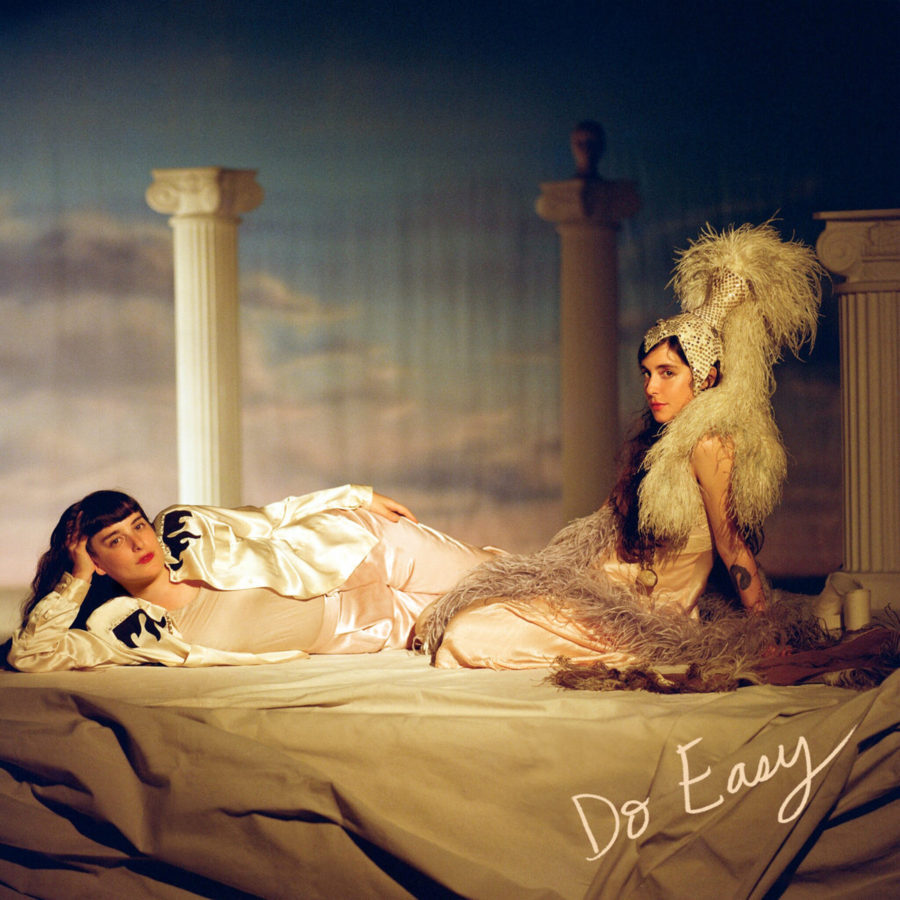 Imagine a sleepy bathhouse covered in marble, with gnarled vining slithering up a set of pillars. Amidst the heavy clusters of steam resting above various pools of salt water we can see peaceful figures propped against an array of heat chambers garnished in stone. Suspended above, nestled in a jumbo clam shell, we see Romy and her sister, Sari, of Canadian art-pop duo Tasseomancy, surveying their cathedral of harmony and well-being. This is the setting for Romy’s ideal concert space, she tells me as the band sets out to play the first few shows of their ‘Do Easy’ tour in support of their latest record. While Los Angeles may not offer such a regal venue to indulge, this type of atmosphere is so fitting for ‘Do Easy,’ a masterpiece presented to the world during a crumbling era of stress and clutter.

“I love bathhouses,” Romy said. “If I wasn’t a musician, I would probably be an anthropologist at a bathhouse.” Inspiration for the record developed from the idea that we exist in a world that isn’t always on the lookout for us. Romy explained that part of being an artist is seeking out ways to control these outside consequences, much like the recent tragedy in Oakland, CA.

“That hit very close to home for me…I knew people in that fire, fellow artists, and I think of how can we create some kind of order?” she said. “Simple techniques, coming back to everything that you do. That’s all we really have. Art is essential.”

The essence of the record was partly influenced by the philosophies of William S. Burroughs on the concept of ‘doing easy.’ Much of this technique highlights simplicity and the importance of taking one’s time, how each step carefully interjects another. The album’s title track, “Do Easy,” gently washes over our senses with soft oceanic waves and alluring melodies that seemingly rock you to sleep. Beautifully produced, it begins like a buoy bobbing up and down at high-tide, then slowly builds momentum and drops us into a surrealist vortex with “do easy” cascading like an alien incantation. It serves as a reminder to slow things down, a mantra for mitigation.

“The technique really resonated with me,” Romy said. “I was existing in a context where I couldn’t really access it, or I wasn’t allowing myself to do easy. I went looking for some kind of validation, so I looked to the poets. Doing easy just kind of hit me, like a lightning moment.”

Much of these ideals flourished during an experimental period for the band.

“I started to get very interested in karaoke and pop music,” Romy said. The record is more of a departure from the band’s roots in folk music, taking flight into the galaxies of art-pop.

“Our origins are in folk music,” she said. “We were living on the east coast of Canada for a while and it felt very honest. Once we moved back to the big city of Toronto it felt like we weren’t playing folk music to the ocean anymore…we had to expand our sound and musical structures.”

En route to Los Angeles, Romy spoke of the different personalities found in glittering cities like L.A. in contrast to the more sleepy seaside towns of Nova Scotia.

“It’s a wonderful place, we love to visit Los Angeles as it serves as more of a backdrop for our work,” she said. “Otherwise it’s a very lonely city with an incredible cinematic vibe.”

The flavors of the new record are dripping with theatrics as well, from breezy waltzes like “Missoula” to more mystifying terror-ridden ballads like “Emergency,” the album delivers a bewitching quality that may be too distant for traditional pop, but perfectly tailored for the future of pop. There is certainly an outfit of mythology, a brand of uniformity that keeps the record tightly bound to a soundtrack fit for any epic life experience. Each track pays homage to something personal, totally removed from anything remotely similar, while still contributing to a larger painting somewhere between “Barbarella” and Sigourney Weaver in “Ghostbusters.” The full-bodied vocals give reason to sway under the stars or cruise down the interstate at night.

“I’m really interested in movement, making music that gets you to interact with it in a physical way,” Romy said. “I recently got in to dance music.”

Packed into eleven tracks that each fold out like a short narrative, the recording process fell just under a week to complete.
“We put the recording together pretty quickly, just five days,” Romy said. “Both Sari and I had written songs separately, and in the end we brought them all together to form one vision.”

The band’s repertoire continues to expand, with more plans to produce together and even formulate individual platforms of expression.
“Sari is in the process of making her own folk record, actually” Romy said. “She has a strong bond to the poets and traditions. There’s always a place for folk music.”

Looking ahead, the duo have already discussed the workings of another album, potentially adopting a new sound along with it.
“We’ve been talking about starting a record, something very potent and conceptual,” Romy said, “more electronic, which I think means something different for everybody, but definitely more experimental.”

‘Do Easy’ is a tall glass of water in a hot desert storm. It personifies the whimsy nomad, the mermaid who rocks with the waves, not against them, the majesty of existing in one’s own dream world. Arrestingly cool and composed, yet hauntingly unhinged and exceedingly orbital, to put it simply. ‘Do Easy’ was released November 11 on Bella Union, now available for purchase on most music platforms.