Interview with Robert Hampson from Loop

Speaking by phone from Portland’s Doug Fir Lounge a few hours before their last US show, Loop’s Robert Hampson admits he’s had a good run across the states, but is ready for home. Though he may be weary, the band’s return to the stage after a twenty-plus year hiatus shows no signs of fatigue, and Hampson’s overdriven guitar is as head-splitting now as it was on Loop’s second lp Fade Out from 1989.

Hampson was kind enough to share his thoughts on coming back to the music after so many years away, as well as insights into his post-Loop solo-project Main, and his work with Godflesh.

Northern Transmissions: A new sound started to develop in the U.K. in mid-80s with Loop, Spacemen 3, and even Godflesh, what was in the air?

Robert Hampson: Musically, it was very much of a time when the last dregs of the postpunk scene, and a lot of English music was lightweight, what was classed c86 scene, lot of bands with a fresh jingle jangle sound, almost west coast pop with hardly any edge to it.

When we came along, there were other bands like Sonic Youth and Big Black who had a visceral quality, but there wasn’t anything like that in England. So it was quite different for people to hear that coming from an English band.

The 70s harder edge scene was all gone by the 80s.

NT: What was your process for creating Loop’s music, did you collectively improvise, or start with a riff and go from there?

RH: Generally, most ideas, the nucleus, would be generated by demoing. I had a little recording set up and home and I would demo ideas there and then I would take it to the band and try to each find parts that you feel as an individual fits the collective.

But when I started loop in 1985 I had a very definitive idea of what I wanted to achieve. When you are taking your first steps toward trying to discover that, there is a point where you waver slightly, but you always find exactly what you are looking for eventually, you have to keep trying. I didn’t want to be the band that keeps making the same record over and over again.

NT: How does it feel to come back to Loop after so many years away?

RH: Strangely, it seems very familiar, it doesn’t seem different from how I approached it 24 years ago. It was a little unusual to start rehearsing again, but it didn’t take very long for everything to fit into place.

My own solo records [under the Main moniker] are vastly different from loop, so to go back to that tradition guitar, bass and drums lineup wasn’t quite as difficult as I thought it was going to be.

I’ve always been a person who wants to move forward. I don’t look back. Being in Loop again, there’s an obvious air of nostalgia, which can’t be avoided. But my mental thought process has reverted back to what it used to be. And you hope new fans and old fans like what you are doing.

We have a lot better accessibility to better technology now. Even in smaller clubs, pas are better, and amplification is much better. I made a conscious decision no to get involved in vintage equipment like I used to which was always very temperamental. I thought everything that I need now is available in much more modern technology, so it is much more reliable, and the build quality…it all sounds better. So I think it is an improvement to what it was 20 to 25 years ago. There is a distinct improvement in the presentation and what we were trying to do live then and now.

NT: That’s interesting, because I was really struck by the presence and character of the live sound at the show here in Vancouver. Is the live sound design influenced by your later work in Main, where the attention to sonic nuance is so heightened?

RH: Our approach is exactly the same as it was before, but the equipment is better, and we have better sound systems. If there is anything I have a regret about it’s that I wish it could have sounded as good then as now, but it wasn’t technically possible.

It really is almost carbon copy of what we used to do.

I have a very specific idea of how the guitar should sound, and I had those ideas back in the day. Nothing has changed in that respect. Almost deliberately, I try not to think about my other career as a solo artist when I’m doing Loop. I want to purely focus on Loop. It has a very different aesthetic. My solo career is about a lot of very subtle dynamics, and Loop is dynamic but is has completely different qualities. It is much more visceral and there isn’t great room for subtlety.

NT: Here’s a question from one of our readers: Did the experience of joining Godflesh for their performance of Pure at last year’s Roadburn Festival influence your decision to take Loop back on the road?

RH: I had already put the wheels in mission before the Godflesh show. When I first spoke to Justin about doing the Godflesh show I was already changing my mind and I was famously reluctant about doing Loop again, but people were talking to me. And it was quite unusual that they both came along at the same time, but it Loop took longer to prepare than playing one show with Godflesh.

NT: I’d like to switch gears for moment to discuss your recent work at the legendary Groupe de Receherche Musicales (GRM) studio in Paris, home to Musique concrète composers such as Pierre Henry, Peirre Schaefer, Luc Ferrari, and Bernard Parmegiani. Can you tell me how you became involved with them, and what it is like to work there?

RH: I’ve been working with them since 2006 and I work often on commission basis. I’ve become friends with everyone there and part of the family. But the studio is not what everybody thinks it is. Everybody thinks it is still full of vintage equipment, and a lot of the original custom-made equipment unfortunately nearly all of that that hasn’t worked for a very long time.

The studios have very nice mixing consoles, but at the end the day, the studios are like most other places these days, it is all computer based. The GRM has always tried to push technological boundaries and so everything they do now, like with the software, it is all computer-based. It’s not as mythological as you think.

The first time I went there I was quite disappointed because I walked in and I didn’t see any of the old equipment. What does survive is in the basement, and, sadly, isn’t in working order.

NT: This past year Editions Mego launched the Recollection GRM sub-label to reissue many of the long out-of-print classic GRM lps from Schaeffer, Ferrari, Parmegiani et al. Do you have favorites among the composers associated with GRM?

RH: There’s not much I don’t like, but my real personal favorite is Luc Ferrari. I think he’s influenced my work more than anyone else. At the same time I’m a huge fan of Parmegiani, Francois Bayle, Michel Redolfi. There’s been a huge catalog of fantastic material that’s come from that source.

With Editions Mego reissuing some of it I’d like to think it is reaching new audience, people who’ve never heard that material before. It’s been very nice for them to reissue some of the classics.

NT: Is there a central idea or question you’ve been trying to answer throughout your career?
RH: What I do is pure sound design, in the way of trying to follow a sonic identity of my own. After all of this time I hope I’ve developed a signature that people recognize.

I’m extremely interested in the quality of sound, and I’m trying to find new concepts of exploring sounds. In brutal truth nothing is truly original anymore…but my interest lies in trying to find a different context. In the way sound design can be very much a personal experience to a lot of different people.

I like an air of mystery. I treat everything like a big jigsaw puzzle. Everything has its place in the big picture. I like to deviate from a certain path as much as I can. But once you’ve made that material public, you are relenting control over it. I’d rather view it as it is all pieces of a bigger picture.

NT: Will there be new Loop music in the future?
RH: We have no plans to. We’re working with our commitments that we’ve made and then after that I’m not sure what the future will hold

It’s been a pleasure for us all. We’ve met good people along the way, and it has been a nice experience to play these songs again. So it is all good. 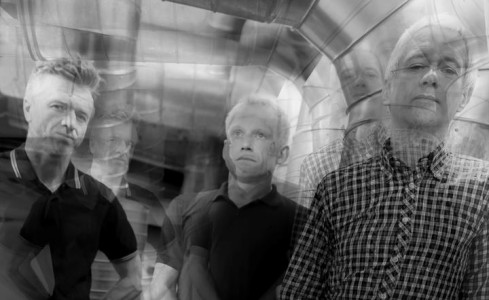