Interview with The Range 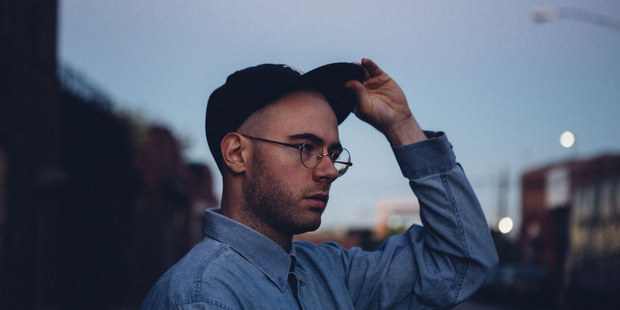 The Range, the moniker for James Hinton, is not your average producer. Rising from Brooklyn, New York, Hinton scours into the depths of YouTube to create high-definition sounds mixed against the enchanting vocal samples of unknown artists. His latest effort, Potential, drops March 25 and marks the 27-year-old’s first release on Domino. Hinton found himself completely enthralled by the stories of the anonymous voices behind Potential’s tracks – so much so, that he decided to make a documentary to accompany it. Superimpose, released this spring, takes a closer look at the individual stories behind the searches. Hinton has placed a unique emphasis on human connection that is impossible to ignore behind each of the record’s 11 raw tracks.

Northern Transmissions: How did you get into making music?

James Hinton: I got into making music from a pretty early age. My mom was a music teacher so it was very much always a part of the house. I remember starting to play saxophone in the fifth grade, and instantly switched over to drums. From there, that’s the instrument I studied. Over time, my friend had this tape deck recorder that could record music so I bought one of those and just kept at it until now.

NT: That’s cool that your mom was a music teacher. She would have been a good influence, for sure.

NT: Your new album Potential is out March 25, which is coming up really soon actually.

NT: It features your unique technique of sampling unknown YouTube artists and it feels like you really dug into that approach on this record, even more so than before. What made you want to take this new method for Potential?

JH: I had done it to some degree on Nonfiction. There’s a few songs on there that have the same type of palette, of a person that was on YouTube and then my music kind of under it. I don’t think I really put together the idea of what was interesting about that. When I was poring off of Nonfiction, it started to really get into my head about who these people were. I was playing these songs every single night and I had no real conception about the story behind the songs. I only knew them for that three-minute section that they were on YouTube, basically. What I really wanted to get at with Potential was pushing that forward and really kind of going for it, which is why this time every single voice that you hear is from YouTube and has not been signed to anything. That’s the idea behind doing this documentary as well; just getting to the humanity behind it, if that makes any sense. It’s much more this idea that these are people who have put this stuff online, lets engage with that to some degree.

NT: There’s a fine line between being exploitive and revealing a new side of someone or something altogether. How did you ensure that you didn’t overstep any boundaries with your artists?

JH: I think it was just about having communication, really. Just every step of the way, being as communicative on my end as I possibly could and listening to people. I think where that often goes wrong is when – it’s so easy in music, everyone gets together for the collaboration and then whoever kind of started it can do whatever they want with it and I think that’s where a lot of the problems happen. I’ve been very, very keen to just constantly – every time there’s a piece of news or a new single that we’re about to announce, I make sure that I’m really in touch with the people who were on the song to make sure that they’re okay with it and that everything’s okay. So far, knock on wood, everyone’s just been really excited about it which is awesome.

NT: I was going to sat , were you met with positive reception when you told them what you wanted to do with their videos?

JH: Yeah I mean, almost surprisingly, it was uniformly good. Maybe what helped was the idea of presenting people with the finished work. I think the concept behind me being like “hey I found this video, would you be okay if I made something with this?” may feel more open ended at the time, but it’s almost better to be like “I found your video and I made this piece, which is finished. What do you think of this?” It’s much more encouraging this binary kind of answer. I also wanted to be open with them about how much I really love the original work, instead of trying to hide it, and present it in a really plain way that’s hopefully true to the original video. Hopefully that had something to do with it being positive but mostly, I think I just got lucky. The people I happened to get in touch with were really nice and kind and happy to be apart of something that they were excited about.

NT: What can you tell us about the process in which you went about selecting the vocal samples for your songs? You find people that don’t have that many views, correct?

JH: Yeah that’s almost the way that I find them, by going further down in view count. I think what stands out to me is – I won’t say the word ‘raw’ but you can kind of see it on a person’s face when they’re experiencing something, you know? Something that’s not packaged and hasn’t come full size. It’s just kind of “I’m feeling this thing, let’s put the camera on, record it, and try to experience some sort of emotion.” At the end of the day, I can do as much filtering as I want to in terms of not HD video or go to page 20 of the search instead of starting at the very beginning. I think you can tell what someone’s really denoting in a very raw way. That’s what would catch my ear to the first bit and often times, they would hit a certain note or hit a certain passage in the middle of the video that would catch my ear and make me want to grab it and go with it.

NT: As you mentioned before, you’re releasing your documentary in the spring called Superimpose that looks at the real life stories of these people behind the voices on Potential. What was it like as you got to know them before? Have you befriended them in the process of this?

JH: Yeah absolutely! I finally got to meet the artists on “Five Four” and “Skeptical” in London just recently and it’s funny how you can meet someone online and hit it off in person the first time. We have this big, long, gigantic Twitter DM chain every time something happens with “Florida” which is very exciting and which is kind of what I was hoping. I think part of the reason why I picked a lot of these videos was because I saw something I admired in the people and I think that’s a pretty good basis for a friendship. The record’s not even out yet – that’s what I’m most excited for, to see where this goes for them and when I get to travel to people’s cities and have them out to shows and all that stuff. I’m really looking forward to that. They’re really just good people that you want to know, regardless of the music or not.

NT: Are you looking forward to getting to test out some of the new material during your SXSW showcases?

JH: Yeah, I’m really looking forward to it. It’s been good. I guess there’s only been three shows of the new stuff since any word about Potential came out so it’s going to be exciting. I really enjoy that process of playing material and getting audience feedback. I know what I like about the album but it’ll be really fun to see, particularly the songs that aren’t out yet, what people are interested in, especially at SXSW where it’s such a diverse audience that you’ll be playing to depending on which showcase you’re at. I have my theory about which album tracks people like but I’m excited to see what they go for.

JH: Yeah! That day is going to be amazing. We’re doing the documentary screening that same afternoon, which is my ideal time to do it. Show the documentary before the show, and then have the show right after. It’ll be really fun to give people all of that context. It’s been nice that they’ve been interested so far. They’re such a gigantic company – the fact that they even care is cool. I think it’s a pretty awesome repository of where people go to do music, basically. They’re a kind of social networking thing that is so catered to this type of thing, so it’s cool that they’re down for that.

NT: You’re also playing Pitchfork Fest and Osheaga, which is really cool. Is the feeling of performing for festival crowds something that you’re familiar with, so far?

JH: Yeah I mean, I had a big run opening for CHVRCHES in 2014 but besides that, I’ve played more festivals than I have headlined shows. I kind of like it – it feels more like a battleground, and I mean that in the sense that most people who are there have options to go see other stuff, so you feel this kind of ownness to try something new and be experimental at a festival whereas at a headline show, most people have heard the tunes already. It’s fun.

NT: With your documentary, how are people going to be able to view that?

NT: I think that’ll be a really integral part of the whole live experience for your new album.

JH: It’s only been a few times so far, but it really does change the way people see it when they’ve seen Superimpose before the shows and it’s been amazing. The conversations that I have after that are so much more interesting, so I’m really happy about that.

Hot Chip Guest On ‘Records In My Life’