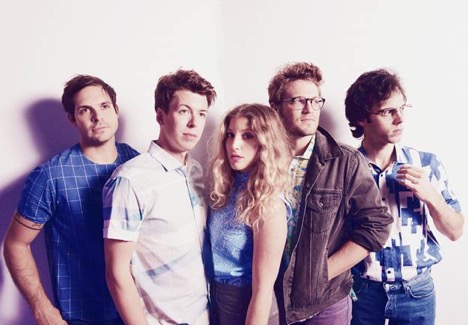 Only twice did Ra Ra Riot cover Carly Rae Jepsen’s sax-fueled, hooky-inspiring E-MO-TION cut “Run Away With Me” live. Once was enough for a fan in the audience to take a video that would eventually find it’s way to Jepsen. “This is amazing!!!” she would tweet about the New York indie pop band’s groovy rendition.

“She posted it and was like, “This is cool!” and was tweeting at us,” bassist Mathieu Santos remembered.

That’s just one of the many milestones the band has hit over their 10-year, four album existence. In the beginning, just a college band at Syracuse University, the outfit’s baroque-turned-synth-pop stylings have brought them to stages all over the world.

After trading strings for keys on 2013’s Beta Love, the band’s third album, Ra Ra Riot, currently consisting of Wes Miles, Santos, Milo Bonacci, Rebecca Zeller and Kenny Bernard, took time off—about three years, the longest stretch of time they’ve been out of the game. Reconvening with new ideas and short runs of tour dates to try out the fresh material, they’ve reemerged in 2016 with Need Your Light, their fourth full length, out Feb. 19.

Both a nod to their past with lush string arrangements and a continuation of the bouncy electronic progression of Beta Love, Need Your Light elegantly balances the best of what

Ra Ra Riot has to offer—dynamic, atmospheric and always pretty.
Just a week before Need Your Light’s release, Santos speaks with us on the band’s history and how that plays into Ra Ra Riot’s new body of work.

Northern Transmissions: With the new record, how do you feel that it fits into the evolution of Ra Ra Riot?

Mathieu Santos: It definitely feels like another step in our natural progression. When we made our first record, which came out in 2008, The Rhumb Line, we’d just gotten together and we didn’t have an idea of what our sound was supposed to be like or what we wanted to accomplish as a band, sonically. From the very beginning, we got used to getting together in a room and hash out our dynamic and hack through the arrangements and build something up together. When The Rhumb Line came out and started to get generally positive feedback, we were like “Whatever we’re doing—we don’t know what we’re doing—people seem to be connecting to it.” We started to learn to trust our creative impulses. Over the years, each record has been kind of a departure from the one before but it’s always been natural to us. I think a big one was in 2013, with Beta Love, there was a fair amount of backlash with that record. People were shocked with the tones and textures of that record. But over time, that had to sink in. people got more used to it. I think that record helped us really push out our walls a little bit. This time around, we’re still doing the same thing. We got back together with a bunch of new music and we had show and tell and we started working on the stuff that was exciting and just trusting our own creative impulses.

NT: Need Your Light feels like there are elements of your whole repertoire.

MS: Part of it is we just turned 10. We were going into making this record and were like “Whoa, we’ve been a band for 10 years!” There’s some reflection happening and a little bit of nostalgia. It ended up being a coincidence but we ended up working with every producer we’ve ever worked with on this new record. We recorded most of it with Ryan Hadlock in Seattle where we did The Rhumb Line. We recorded a little bit in Brooklyn with our friend Andrew Maury and he recorded The Orchard with us. We went through a few of the songs with Dennis [Herring] who produced Beta Love. In some ways, it did feel like a compilation of everything we’ve done so far and also a jumping off point for the next 10 years.

NT: Did you throw yourselves a birthday party with a cake and everything?

NT: I read that “Foreign Lovers” is a 10-year-old song. How does it feel to work on older things and bring them into a new decade?

MS: That song was really fun and it can be really refreshing. As you’re going along you get caught up in your own methods and sometimes it’s easy to fall into the same patterns with the way that you write or arrange, especially now that we’ve been doing it together for a long time. Sometimes it’s really helpful to dig through the old folders and unearth some old demo that you wrote when you were a kid when you weren’t thinking about writing for an album or for a band. Sometimes there’s something really fun or a certain degree of innocence. That’s happened before, where we’ve found an old idea, whether it was something we’ve come up with years ago or that one of us had done before the band started. It adds a different dynamic. It makes us look at the new songs we’re working on a little differently.

NT: Is it like opening a time capsule or re-reading a diary?

NT: When you have older material side-by-side with newer things, how does that translate to a live setlist?

MS: Especially playing things with all of our records, that was a thing when Beta Love came out. It was like, “Oh, what happened to all the cello and violin?” And we were like, “We still have those things in our band, even though they’re not too prevalent on this record we still play our older stuff live.” When you come see us live, we play stuff from the whole past 10 years. It makes it more enjoyable for us and hopefully for the fans. We have a great connection with everything we’ve made. As we make new stuff, it’s fun to play songs back-to-back that are separated by eight years or something.

NT: Are there any crazy stories from writing and recording Need Your Light?

MS: Thinking back to Bear Creek Studio in Seattle, the studio where we did The Rhumb Line. We had a really great time there in 2007 and over the years we always wanted to return but didn’t know when it was appropriate to do so. As soon as we got into the studio [for Need Your Light], it felt like the same experience. The studio was exactly how we remembered it, but we were all nine years older.

Most of the production and recording was pretty smooth, but we had one little adventure in the middle of it. We had booked a show in Rochester, NY months in advance—we didn’t know when we were going to be in the studio. We were out in Seattle and we realized the show in Rochester was in the middle of recording. We’ll fly back to New York for a day, have a break, play a show and come back. The morning we tried to fly back, there was a huge blizzard and all the flights were getting cancelled. Everyone was yelling at each other in the airport. The people working there were telling us we weren’t going to be able to get a flight back to Seattle for four days so we were kind of panicking. We went into this problem solving, damage control mode. We ended up renting an SUV in Rochester and we drove overnight through the snow all the way to Columbus, Ohio because that was the next closest airport that had the next departing flight to the west coast. At 6 in the morning, we got on a plane to L.A. and in L.A. we were on standby. It was funny, we were going down the line as a seat became open, we were like “Well, Kenny, drummer, you have to go first because we have to record the drums first.” And then anther seat came and I get to go because I play bass. One by one, we all made it on this flight and somehow made it back to Seattle and only ended up losing a few hours in the studio. So that was a fun little detour.

NT: How do you let things like that not affect your playing?

MS: When we got back to the studio and we all looked insane. We walked through the door and Ryan started laughing and said I looked like Doc from Back to the Future. We were in rough shape. Immediately I started tracking bass after having been awake for 36 hours or something. The best part about that was Rebecca, our violinist, just took all of our collective stress out on cooking this amazing meal. We had this big family dinner and everything felt better. Crazy situations like that, you go through them together and it ends up being a fun, bonding thing even though it ends up being terrible at the time.

NT: Looking back on the last 10 years, what stands out as something that encompasses the whole experience of being in Ra Ra Riot?

MS: We’ve had so many amazing, incredible experiences that we never thought we’d experience. When we first started as a college band, we formed just to play house parties at Syracuse University. After that first semester, we had a lot of fun and were like, “Should we try to go on a small tour in the summer?” It just started to snowball. Somewhere around those early days, we sat down and thought about our goals. We made this list of goals that included playing on Letterman and touring in Japan. There was this list of totally outrageous goals. Our manager kept that list and a few years ago, he found it and we looked at it and we ended up doing everything that we put on this joke list years ago. That was pretty amazing. That sums it up to me. We’re having fun and making it up as we go along and seeing where it’s taken us. So far it’s taken us to a lot of crazy places that at one point we thought were impossible. That gave us a lot of confidence moving into the future. We made a new list with even bigger goals.

MS: Well, I don’t want to jinx anything, but I’ll let you know later if we accomplish them.