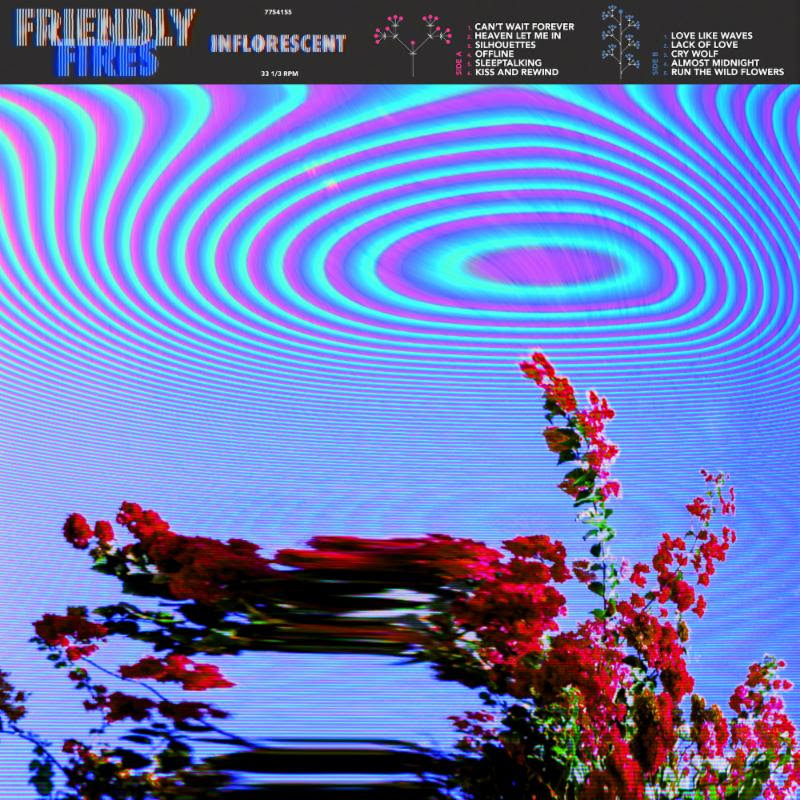 8 years. Think about what’s happened in the 8 years between Friendly Fires’ records; actually, probably best not to! Either way, 8 years! After touring 2011’s ‘Pala’ the St Albans’ party starters retreated to the studio with dance music pioneer Andrew Weatherall with the idea to create something more psychedelic; however, the outfit couldn’t get their ideas to gel, frustration set in, songs were scrapped, sessions abandoned and then, the trio decided to embark on solo endeavours whilst meeting up periodically. Almost a decade later and after reconnecting to the Friendly Fires-mojo, those hip-wiggling masters of the indie-dancefloor have ‘Inflorescent’ ready to set your pulses racing and your feet strutting.

It’s with a sense of irony that ‘Inflorescent’ begins; with a disco beat, Balearic piano and swathes of horn parps,
the three piece swagger back into our lives but underneath the funky rhythms, band vocalist Ed Macfarlane can be heard confessing the autobiographical lyrics of “here I am again/watching chances pass me by/scared of tripping up/maybe I raised the bar too high?”. Which is shortly followed by the poignant “I need to realise I can’t keep waiting forever”. It would seem the sense of frustration at not creating something up to the band’s standards paradoxically inspired the record’s opening track. This is the record’s highwater mark; the music is jubilant and high energy but at times, a sense of melancholy infiltrates the good vibes. Choppy guitar and vibrant percussion bring the carnival vibes to ‘Silhouettes’ as MacFarlane admitting “all the memories of you/they bleach with the sunshine”, as if to ruminate on a holiday romance. Euphoria ebbs and flows through ‘Love Like Waves’, as bouncy keyboard stabs converge with jaunty synth patterns; the band’s frontman honestly states “love like this is hard to find” while the song undulates via jerky rhythms. Following quickly in ‘Love Like Waves’ slipstream, the squelching NYC techno influenced ‘Lack of Love’ has MacFarlane reflecting on the other end of the spectrum, when he’s “restless because I’m fulfilled” due to “hurting from the lack of love”. It’s that melancholic nuance again, as Friendly Fires plunge us into a hedonistic subterranean club, with a darker sonic tone than elsewhere on the record, while the band’s vocalist confesses “I feel like I’m fading”. A summery 80s pop shimmer cocoons ‘Kiss and Rewind’, which acts like an audio olive branch “we’ve got nothing to gain saying who’s to blame”. ‘Offline’s carbonated sax parps, combined with clip-clopping percussion provide a sense of escapism and the need to go off the grid “feel like stepping outside/leaving all bad vibes behind”. ‘Cry Wolf’ on the other hand is where the album dips into a brooding sea of trepidation; shadowy synths and light twinkles has MacFarlane purr “could you let me be/you know you’re the cause of my anxiety” like someone who’s having their heart strings tampered with. ‘Run The Wild Flowers’ has ‘Inflorescent’ signing off in defiant and determined fashion; “it’s up to you and me to redefine our reality”
announces FF’s mouthpiece, as if to empower the listener to grab life by the balls and rid our minds of the toxic voices that occupy it. With a sound verging on LCD Soundsystem’s endless indie-dance rock, the song scales and burbles, as Macfarlane demands for us to “dive into the dream behind our eyes”.

It’s like Friendly Fires has awoken from a coma; they’re still the same samba indebted party boys that hit you right in the dancing shoes and the heart, but the world they’ve re-entered isn’t the same. They’re the antidote to your 24hr News channels documenting all manner of unrest and the bullshit on your social media feeds.

It may have been 8 years but ‘Inflorescent’ is well worth the wait and right now, we need Friendly Fires more than ever.