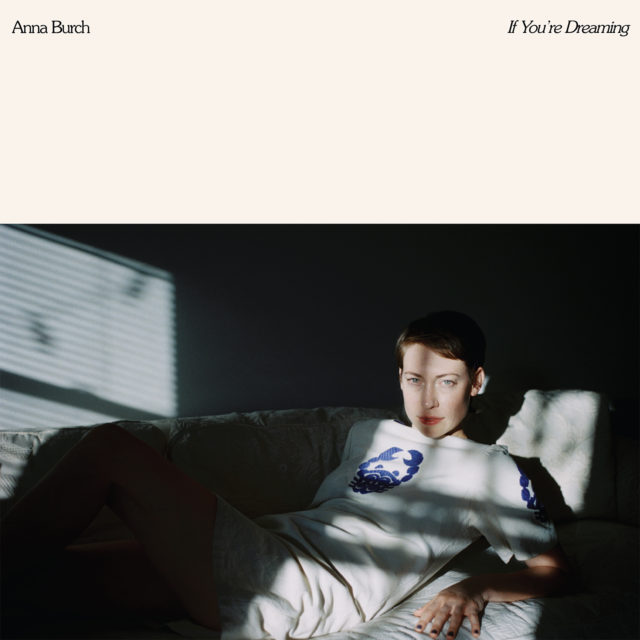 The formula for creepiness is usually to change one minor detail in an unexpectedly mundane way. Toe-headed kids in a park? Not creepy. Those same children in a corn field? Creepy. Beautiful 60s melodies sung by a pretty female voice? Not creepy. Those same songs performed by Nico? Haunting. Anna Burch’s If You’re Dreaming, her second album, has Burch continuing to strip 90s indie-pop sounds down to their barest essentials, stopping just a few feet short of folk, but inflecting everything with a Nico-esque twist that, while not Children of the Corn scary, is surprisingly and delightfully disturbing.

The twist is Burch’s voice, mellow and breathy, a very 90s cross between Billy Corgan and The Cranberries‘ Dolores O’Riordan, and which crawls over tempos that are just a little too slow. Your ear anticipates a bit more of a clip to the tracks but by slowing things down, Burch simultaneously throws a spotlight on to her off-kilter lyrics and also creates a broken music box kind of vibe, which is right up there with kids frolicking corn, in terms of degree of fear inducement.

One of the album’s most interesting songs is “Jacket,” which is a cross-pollination of 50s doo wop melodies and late 20th century college rock. Burch’s lovely voice is front and center over a bed of shimmering, chiming guitars and a drum beat that feels like it’s being reluctantly dragged by the rest of the song. Lyrically, Burch is singing about the left-behind jacket of a lover, with a focus upon the outerwear. It’s a compelling way to tell a fairly standard story, and while it’s told first-person personal, Burch’s voice never reveals any emotion.

Tom Petty used to lament that when musicians tour too much, every song becomes about the loneliness of the road. Love and broken hearts are similarly challenging in that it’s quite possible, if not probable, we’ve already heard every take. Burch cleverly works around that challenge on “Every Feeling” a deceptively simple love song. Burch unfurls another gorgeous melody over instrumentation that if not sluggish is certainly leisurely. The music is pretty, but the lyrics are more severe: “We’ve commodified every feeling / What’s left in my heart for me to sing?” While I’m sure other artists have attacked capitalism though love songs, I’m not sure I could name any in this moment.

If You’re Dreaming follows the trajectory of Burch’s debut, Quit the Curse, with Dreaming a bit more contemplative. But Burch’s strength continues to be her youthfully weary voice, somehow both inviting and misanthropic, which takes straight-forward songs in unexpected directions. In that way, I’m reminded of the aforementioned Nico, who also used a unique voice on top of familiar song structures. Both artists are like porcelain dolls in an attic: delicate at first glance, but surprisingly durable, and also—perhaps most importantly—able to convey an all too fleeting sense of inexplicable panic that makes you feel alive.