HOPE have shared their live video for “Kingdom.” The clip was recorded Recorded at this year at Haldern Pop Festival. The German band has had a busy year, touring with the likes of ALGIERS, IDLES and METZ and slots at Pop-Kultur Berlin, Haldern Pop and Reeperbahn Festival, the band have also been in the studio with Jim Barr (Portishead) working on an upcoming 2019 EP release.

HOPE’s Drop Your Knives is all about refusal and anger, encountering desire and love. To portray this, video director Riccardo Bernardi plays on the interaction between darkness and light making every picture explode – creating a new aesthetic that radiates more darkness and dystopic energy than an entire series of Black Mirror. Speaking about the artistic direction of the band, singer Christine Börsch-Supan explains… “The black aesthetic is not the same “black” of Wave or Gothic bands, but the unpretentious black of or Talk Talk. A black which lets you forget the Jazz, the academics, and the provinces that we come from.”

In 2017, producer Olaf Opal (The Notwist) built a studio in the remains of an abandoned lung sanatorium on the outskirts of Berlin, where the band recorded their debut LP. This space captured a cold ambience that colours the recording in a unique way. The album’s artwork is minimal and their information sparse, which allows the audience to experience their heavy sounds in the purest possible way. 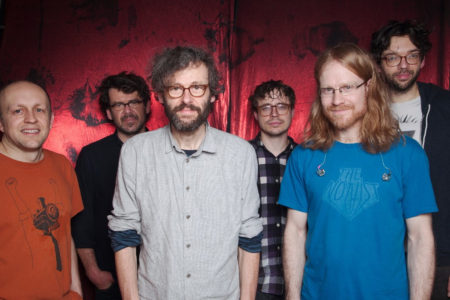