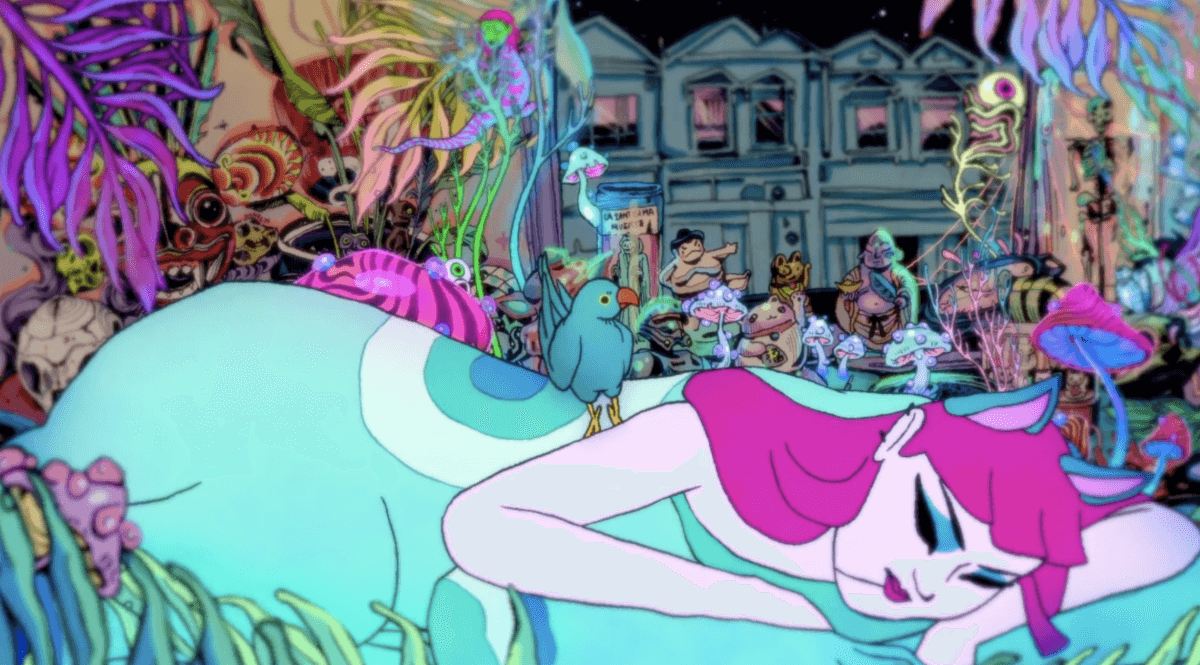 Co-directed by Lauren YS and Lester Chan with additional animation from David Osegueda, the new visuals are a deep dive into a colorful wormhole where the band is animated as various other-dimensional creatures. It’s a fitting visual for a track whose lyrics explore the bizarre mating rituals of leopard slugs (they turn fluorescent) and seahorses (they lock tails and dance).

Nai Palm shares about how the video came together, “One of my most beloved dearest friends, Lauren YS, who is a superstar illustrator, has intricately brought to life the inner fabric of my brain’s innermost desires. I feel like we are two parts of the same coin. They cover the visuals (in collaboration with animator Lester Chan), and we cover the sonics. We hope to take you on a sexy bizarre journey into the kinks of the animal kingdom. Love from us.”

The irony of the completion of Mood Valiant was that it coincided with another health crisis, the COVID pandemic. In the Great Pause, the band found more time to tweak, and more time to create. The ups and downs, the starts and stops of the process, inform the very name of the album, for which Nai evoked, again, the spirit of Suzie Ashman: “My mother had two Valiant station wagons, iconic, vintage Aussie cars,” Nai says. “One was white and one was black. And depending on what mood she was in, she would drive one or the other. She was a single mother with six kids: If she drove the black one, you knew not to fuck with her.”

“The title of the album really encapsulates the whole spectrum of the journey,” Bender adds. “Everyone’s been through some big challenges. I feel like we charged through the mud to get this thing done. And there’s just this valiant, victorious feeling, coming out of storm into calm waters. The sun is shining, we see the shore. We did that! I feel proud of the way this sounds, the emotional depth of it. And I hope that it brings people some sort of comfort in this hard time.”

For Bender, the act of making the album brought him solace, too, and clarity about the nature of friendship: “At the end of the day, who was there for me? The band. They’re my homies.”

“When you think your life is going to be taken away from you, it makes you think about who you are,” Nai says. “I guess after the breast cancer scare I decided that I needed to prove to life that the offering I have is genuine. My only wish is to live and offer my experience of time and beauty.”