While still in middle school, Skating Polly recorded an album in their living room and called it Taking Over the World. Today, it seems like they could actually do that. The band’s latest effort, The Big Fit, is their most fully realized collection of head-bopping, not quite sugar-sweet melodic pop music infused with visceral, distortion-drenched punk sounds and attitude.

It’s raw, infectious, and exciting. It’s real. Step-sisters Peyton Bighorse and Kelli Mayo describe their sound as “a little bit musically schizophrenic.”  Their songs tend to fluctuate in tone and intensity. A whisper. A scream. A piano ballad right next to a punk punch in the throat.  It’s all very “ugly pop,” as they like to point out.

“I love singing, and it’s really all I ever wanted to do,” explains Mayo.  “Peyton had always wanted to be in a band. Since she was my best friend in the world, it seemed like a fun experiment we should do together.” The experiment began with both teaching themselves multiple instruments so they could switch back and forth, with one providing drums and back-up vocals to songs mainly written by the other.

On their latest release, the pop songs heavier more massive than ever. “The Big Fit is a more intensified version of showing someone your favorite record, or your favorite book, or your favorite painting,” states Bighorse. “Making this record has been like sharing a piece of ourselves that we’ve never really revealed before.  Releasing it and having other people listen to what we created will be like letting listeners in on a real part of who we are.”

The Big Fit was released on March 18, 2016 through Chap Stereo via Burnside Distribution and produced by Kliph Scurlock (Gruff Rhys, Flaming Lips). “Hey Sweet” is the 4th official video from Skating Polly and it was directed and edited by Dave Smith. The video features a coolly calm Bighorse and an antic Mayo ripping through the wild alt-rocker’s menacing lyrics with spunky ferocity. As the bass line heaves mightily, the crunchy guitars rage with noisy distortion, and the drums and cymbals dynamically crash and clash, Mayo screams and exclaims with throat-shredding fervor “This won’t hurt too badly / I’ll just take your skin.” 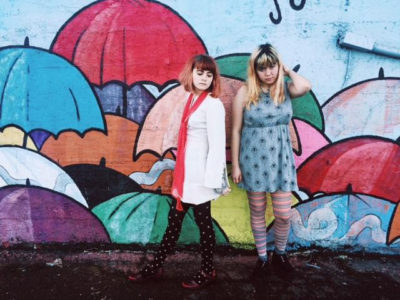