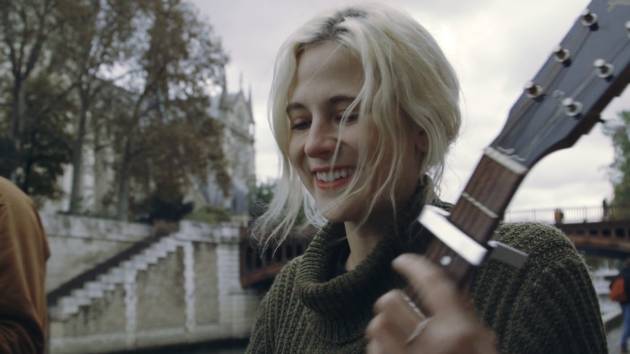 Helena Deland recently recorded a session, for one of favourites, La Blogothèque, filmed in Paris ahead of her Pitchfork Avant Garde set. The first clip features Helena and guitarist Alexandre Larin wandering along the banks of the Seine to play acoustic version of “There Are A Thousand.” The tender “Two Queries” follows next, filmed inside the Thierry Corcelle bookstore as a duet with Helena’s friend Lysandre Menard.

Deland’s current collections, From The Series of Songs ‘Altogether Unaccompanied’ Vol. III and IV was released to much acclaim mid-Autumn through Luminelle Recordings. Helena just completed a run of U.S. tour dates, rounding off a stellar year for the Montréal artist, whose video for the sleek synth pop gem “Claudion” recently premiered, the clip is described as a an ode to friendship, featuring the song’s muse and Helena’s cousin, all artfully directed by Bronwyn Ford.

There’s no discernible pattern to Helena Deland’s latest release. On the third and fourth volumes of From The Series of Songs ‘Altogether Unaccompanied’ the Montréal-based artist has amassed a collection of memories in song form, more like a box of old photos or unsent letters than a traditional EP.

From The Series of Songs ‘Altogether Unaccompanied’ Vol. III

From The Series of Songs ‘Altogether Unaccompanied’ Vol. IV