BODEGA have unveiled another new single, “Gyrate,” from their forthcoming debut album, Endless Scroll, coming out July 6th on What’s Your Rupture?. Nikki Belfiglio from the band said of the song, “When I was a little girl I used to masturbate in public (once at a JC Penny perfume counter). My parents, not wishing to shame me told me I shouldn’t ‘gyrate’ in front of other people. My song uses the language of  Top 40 pop to celebrate self-sustainability and female pleasure.” Note the lyrics, “In the middle of a party. In the middle of the floor. You can get it all out right now.

Limited physical copies of Endless Scroll will be available at BODEGA’s Sunnyvale shows throughout their June U.S. dates while supplies last. Following another European run in July, BODEGA will tour North America throughout July and August. This summer marks the first time BODEGA will play many of these cities. A full list of dates is below 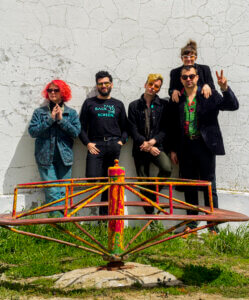