Chris McLaughlin, recently dropped a new video for his solo project Cigar Cigarette. “Guilty Pleasures,” Chris explains, is a song that takes place in an early period of the internet, and is built using sounds and memories from each of the last four decades. It’s about two people meeting on a road in the woods and exchanging briefcases which contain their own internal organs. I thought it would be funny to begin a song with the beat from the 80’s hit Come On Eileen, making hi hats from voices and chords from vocoder. Ultimately, it ascends into a wash of shoe-gaze guitars and heavy modular synths as the characters in the song take turns swallowing their own lungs. He adds “As an engineer I love the process of recording sounds; but as a producer and musician I’m more interested in resampling those sounds and creating a collage with them, rather than just letting the performances sit. I blended the vocoder and natural vocals for the same reason: I want the song to evoke the same cold unease of the uncanny valley, to feel like something a slightly imperfect copy of a human would make.”

The video was directed by frequent Cigar Cigarette collaborator Elyse Winn of MOTHERMARY, and shot by Michael Pessah (Scandalous, Insecure, Saving Flora, Smiley Face Killers, Viva La Causa). We wanted to use the “poor man’s process” technique of projecting a video behind a stationary vehicle to make it appear like its moving. Using these sorts of “movie magic” practical effects from another time period can create a much more surreal and disorienting world.

McLaughlin’s wide-spanning ear and expansive vision. Boasting ten years of production work ranging from Kanye West and Justin Vernon of Bon Iver to Fabrizio Moretti of The Strokes’ machinegum collective and a recent Neon Indian remix, McLaughlin’s solo debut is a strange and stirring collection of songs that calls to mind The Smiths and The Virgins if they played on the ashes of a fallen city. 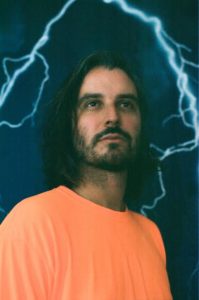