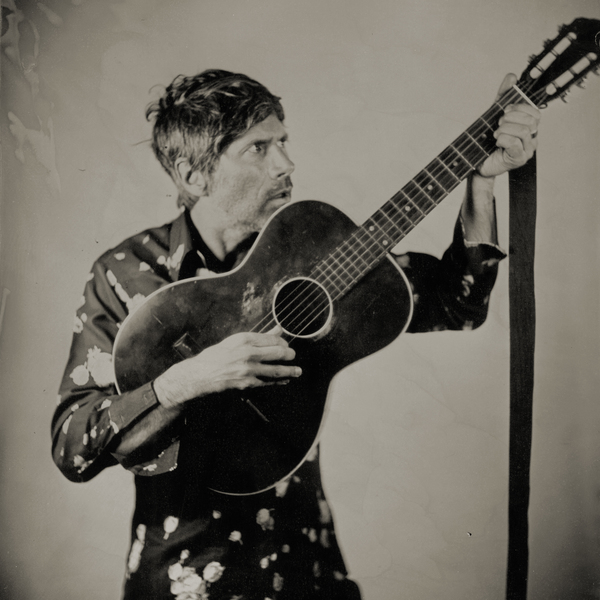 Whether in his bands or as a solo artist, Gruff Rhys has always taken a pretty colourful approach to song writing and never seems to sit still. For his latest album Babelsberg, Gruff Rhys took a handful of simple songs with deep messages and expanded them with orchestration to make something magical. We caught up with Gruff ahead of his North American tour to talk about the strangely practical way his band came together, reusing old material and how he’s expanded into different mediums.

Northern Transmissions: You describe this surrealistic take on history and reality in your bio for what Babelsberg is, was this an inspiration for your new record or was the weirdness of the name something that just stuck with you?

Gruff Rhys: It wasn’t a conceptual record per se. I was just looking for a way of referencing the conditions of recording really. That was all against the clock before the studio was knocked down to build luxury apartments. I didn’t have a record deal in place at the time, so the only deadline I had was the building’s life ending. It took me a while to come up with the title and then I’d made a note of the German area’s name a few years earlier, while on tour. It just seemed really magical to me, so I tried to imagine a kind of tower where people are trying to reach heaven in a way. There’s also a Babelsberg orchestra that makes film music, so that gave the name a kind of orchestral meaning as well.

NT: How did Kliph Scurlock, Stephen Black and Osian Gwynedd get involved with the record and what did they bring out of it?

GR: By coincidence when we recorded the record, we all lived within a square-mile of each other. On a practical level I could drive around and pick everyone up for the studio. Stephen and Kliph had played with me a couple months before for Candylion, about 30 shows. Osian had also played on my previous record so I’d played with everyone a lot physically and it was just super convenient.

NT: How did your opera work with Stephen McNeff transform into the orchestration of this album?

GR: I wrote a libretto for an opera of his. He’s this composer and I ended up writing lyrics for some of his pieces, which was the first time I’d done something like that. He helped me through the process which was interesting, and it still hasn’t been released despite preceding Babelsberg. I passed him my songs leading up to the record and it took some time to write and find an orchestra.

NT: How has adapting this for a live show been and do you have plans to perform it with the BBC National Orchestra of Wales live at some point?

GR: We’d launched the record in June as part of a festival in Cardiff, where I was able to play with that orchestra. There were 72 musicians and the original band who recorded the album joined me as well. Often with my records I’m not too disciplined in the studio and end up experimenting with different techniques. I’m not always interested in capturing a moment and I’m usually happy to just use machines and make something memorable. This time was very disciplined so that the band takes could really be live takes. Joining these 79 musicians including the conductor for the live concert was amazing. It was actually easier to recreate in this way because so much of it was raw, and we didn’t want to over-polish it. We’ve adapted the music for smaller orchestras in London too and that’s worked really well as well! Unfortunately those cities are the only places I can really afford to play with an orchestra. The rest of the time a piano ends up filling up the whole range fairly well.

NT: What made “Negative Vibes” feel like such a tight fit for the album after you first brought it out in your Candylion musical?

GR: That song was a starting point for me I suppose. It’s such a simple song and as someone who listens to a lot of music I’m interested in seeing it progress. Sometimes these songs can be valued similarly and you can find a way to make them progress. I had this batch of simple songs, and thought that they lyrically engaged with the world of today. I’d gathered a bunch of songs around “Negative Vibes” and they were so direct, so I thought I could make them live together in some way.

NT: You’ve done video game music, musicals, and even directed movies recently, so how do you see a through-line between these atypical projects and what you do on your studio albums?

GR: The uniting factor is always the song or collection of songs at the heart of everything I do. The films I’ve made have been based on tours for the most part too. I wrote a book as well to supplement the music for American Interior, because there was enough material to warrant it. As long as there’s songs involved, I can experiment in different mediums and push things. My fear is writing the same music over and over again, so this allows me to experiment with what I do.